One of the things we wanted to do when we were in San Francisco was to ride the famous cable cars! I knew my boys would love them! So on one of our days in the city we utilized the cable cars as our transportation for the day.

We caught the cable car at Powell and Market Street. This was in Union Square so we got to see all the shops! My hubby even went shopping at The Gap for some warmer clothes for us all while we stood in line for the cable car! Yes...it was FREEZING in San Francisco that day and we had only packed summer clothes! Luckily we packed a lightweight jacket but our legs were so cold! Union Square saved us!!! 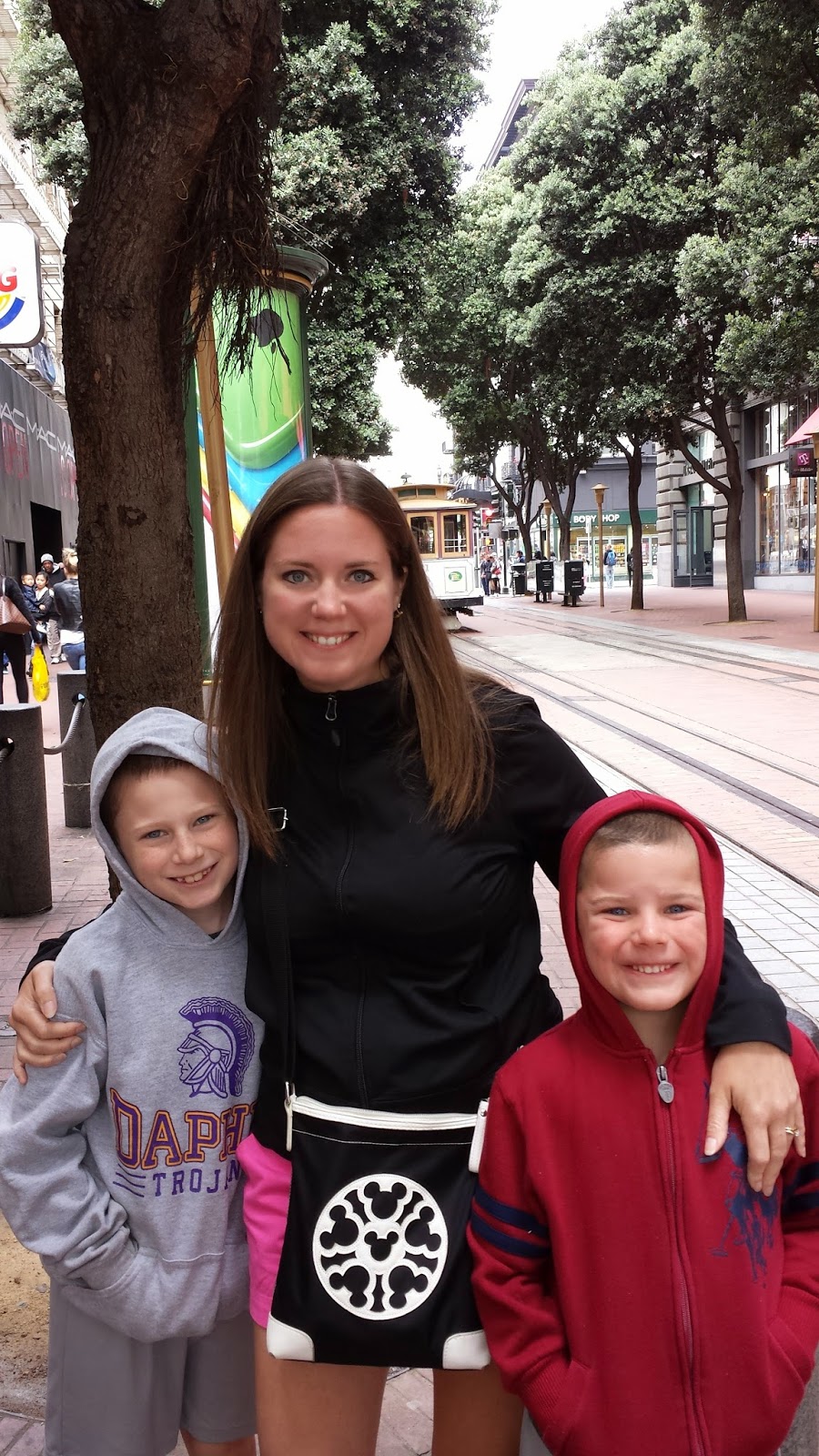 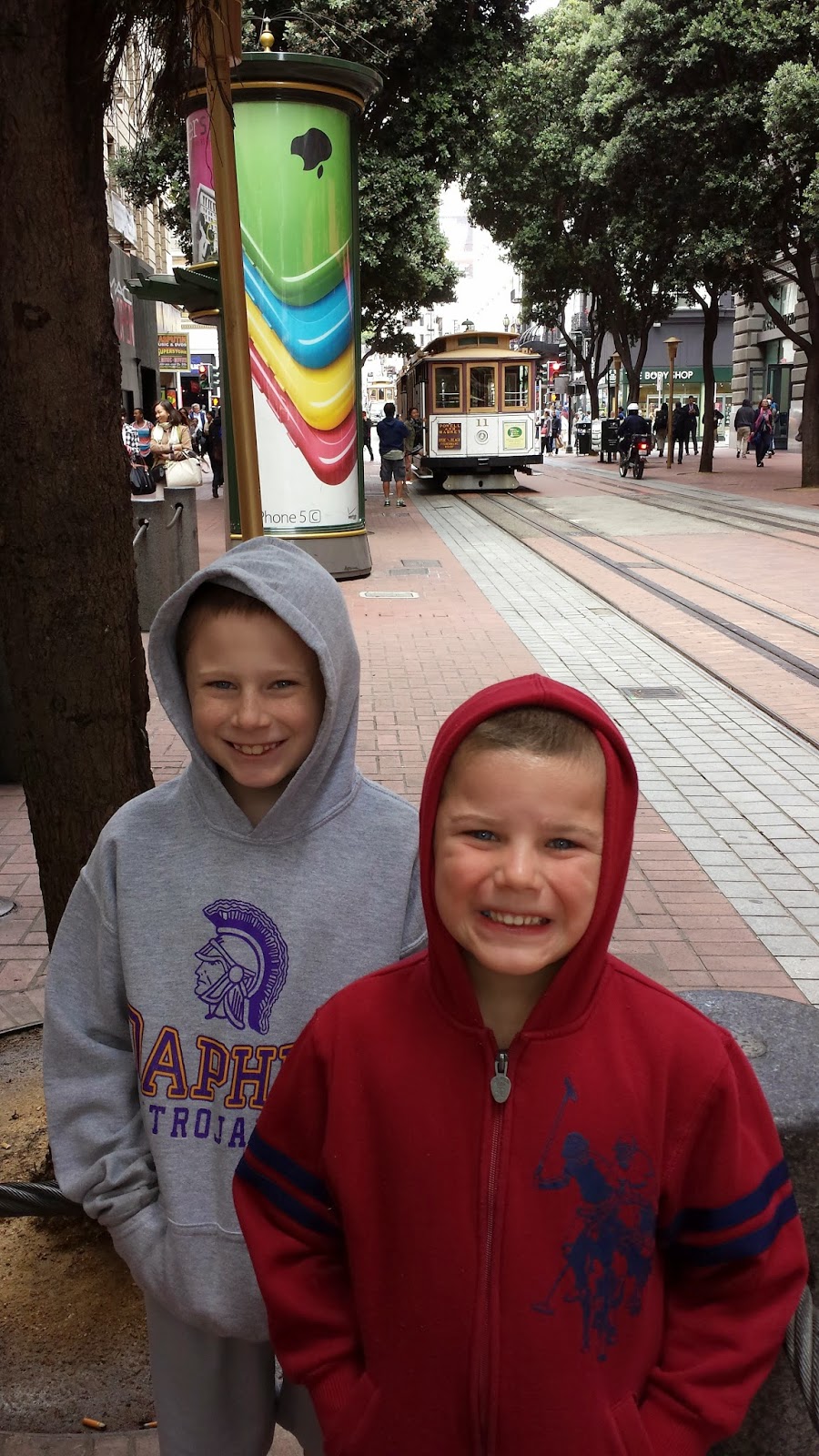 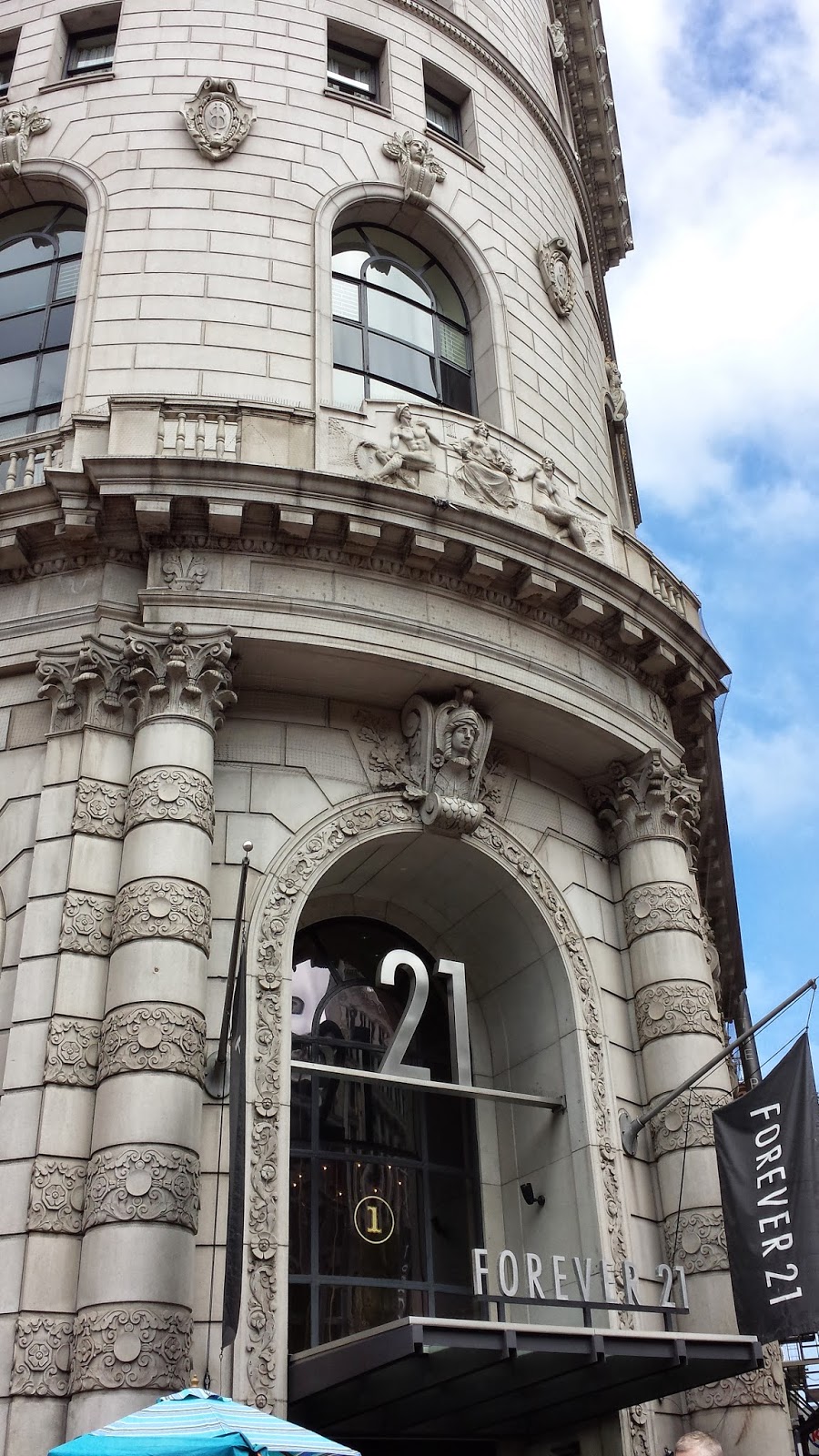 We stood in line for about 30 minutes or so waiting to get on the cable car. So we had lots to look at while we waited! There was a guy standing by the line singing and playing a guitar for donations. Seeing the tall buildings was also fun. We don't see those where we live! 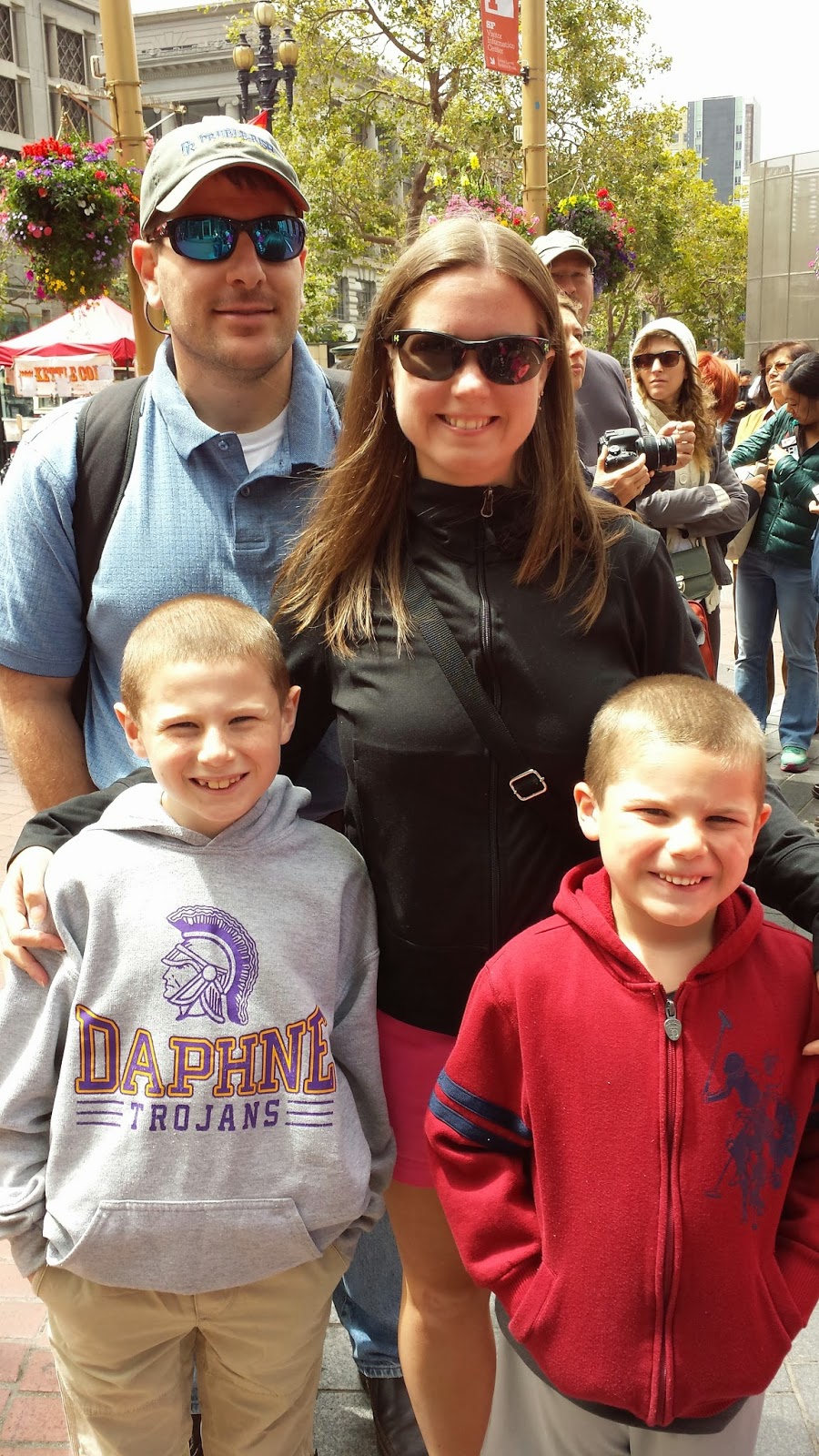 We also got to see how the cable cars worked. Once they reach the end of the line they go on a turntable that turns them around so they can head back in the other direction. The workers would push the cable car around using the turn table. It was really neat! The cable car system was invented in 1873 in San Francisco to deal with the fearsome hills of the city. So they've been around a long time! 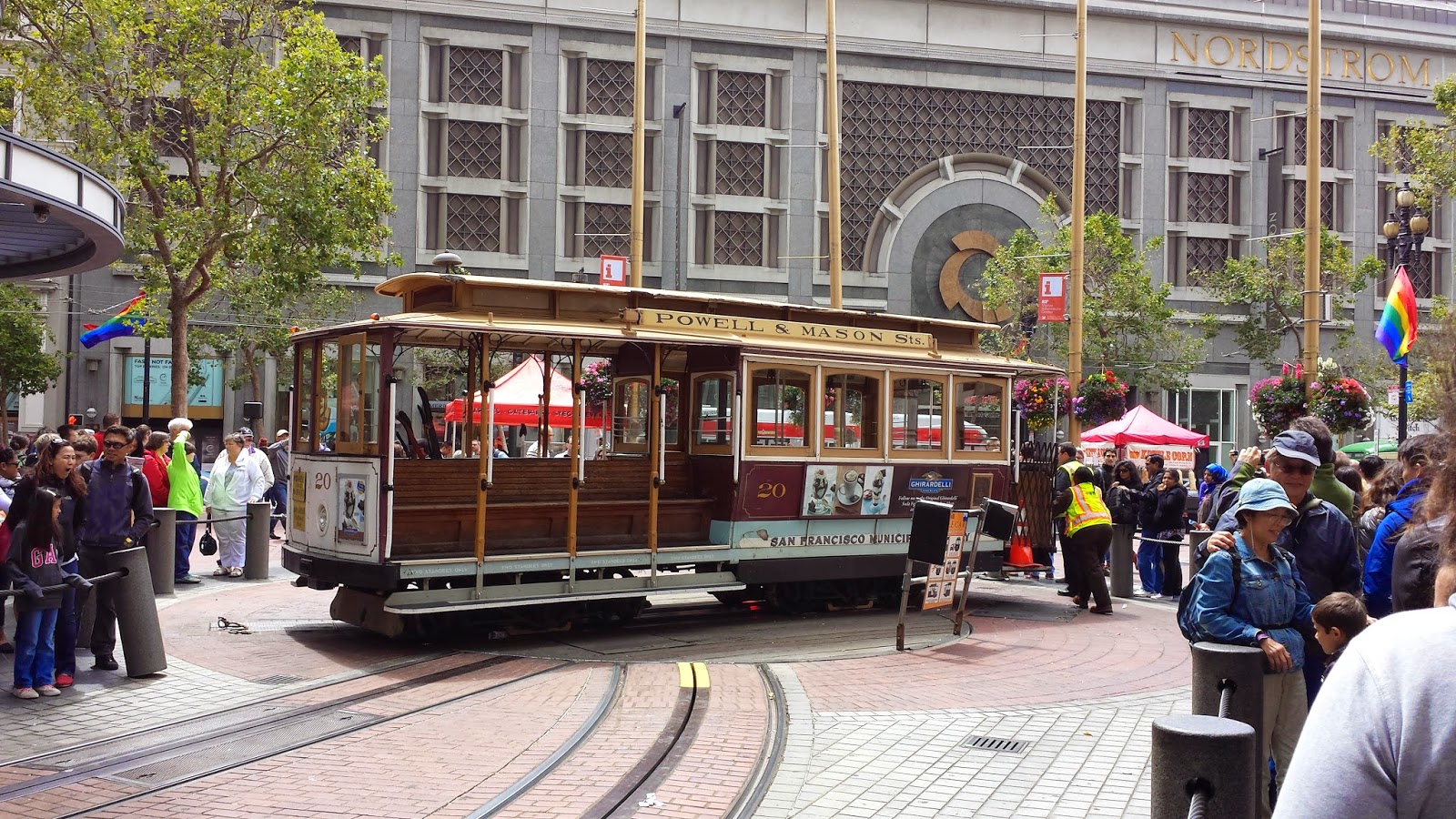 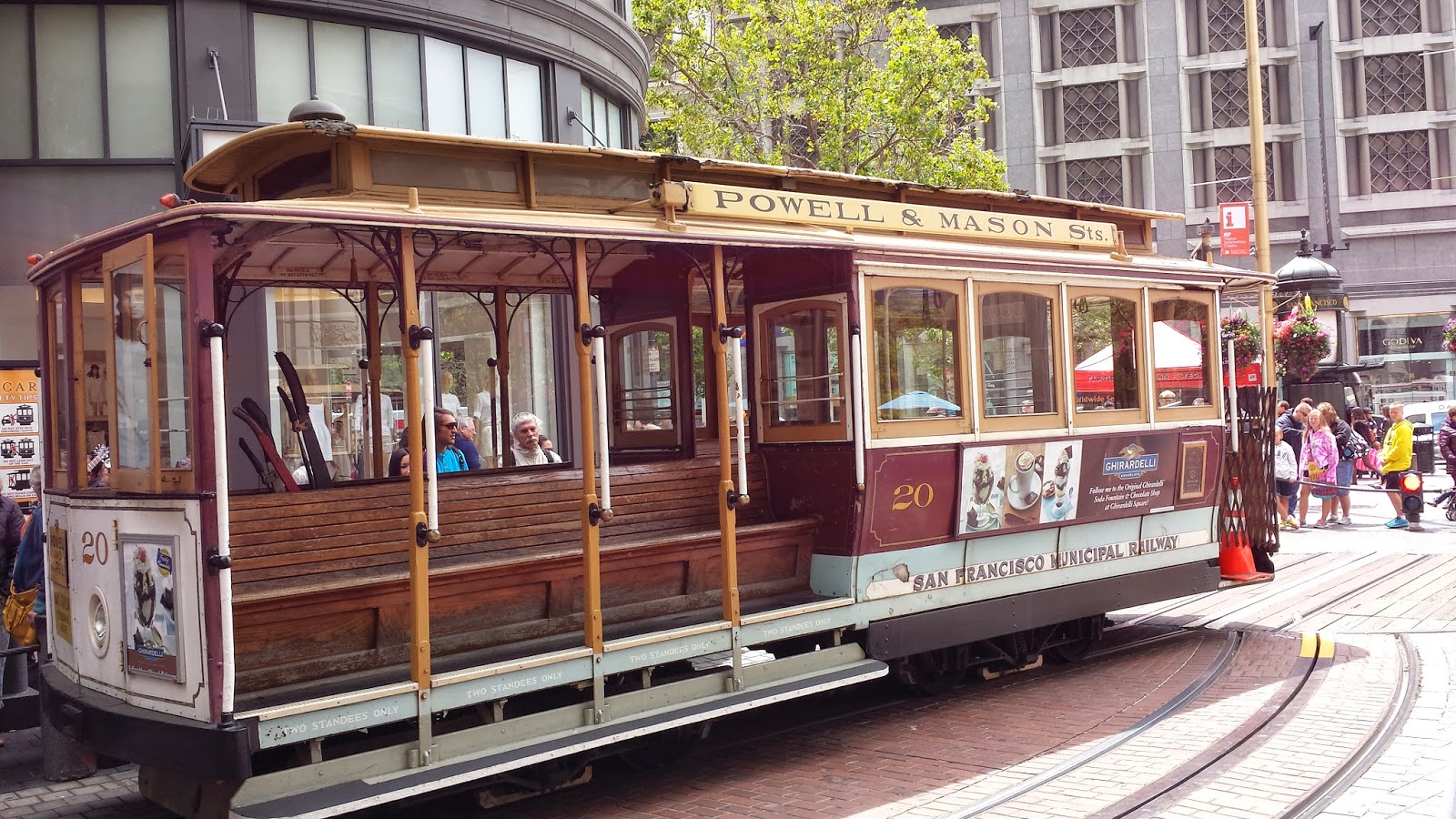 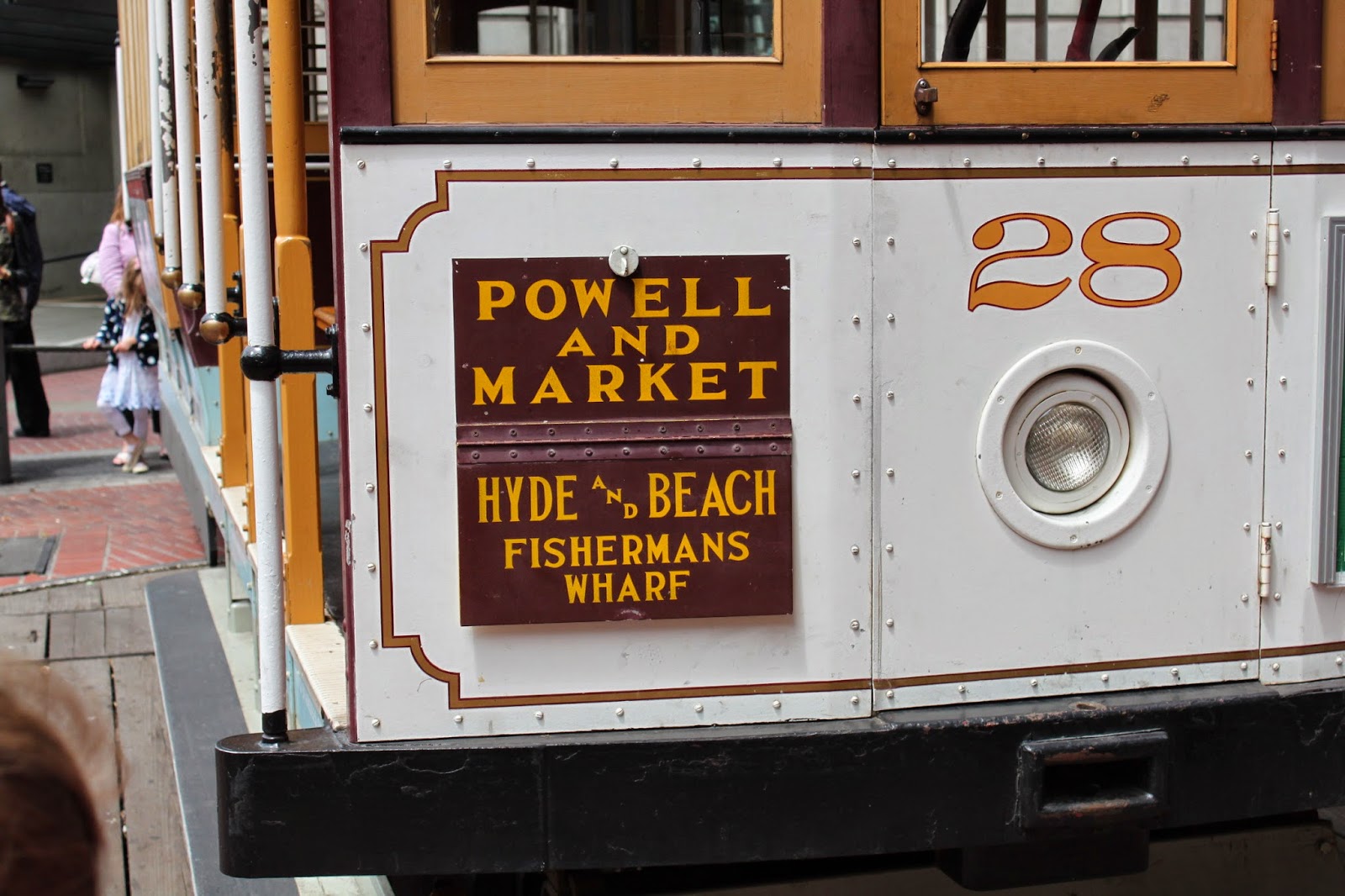 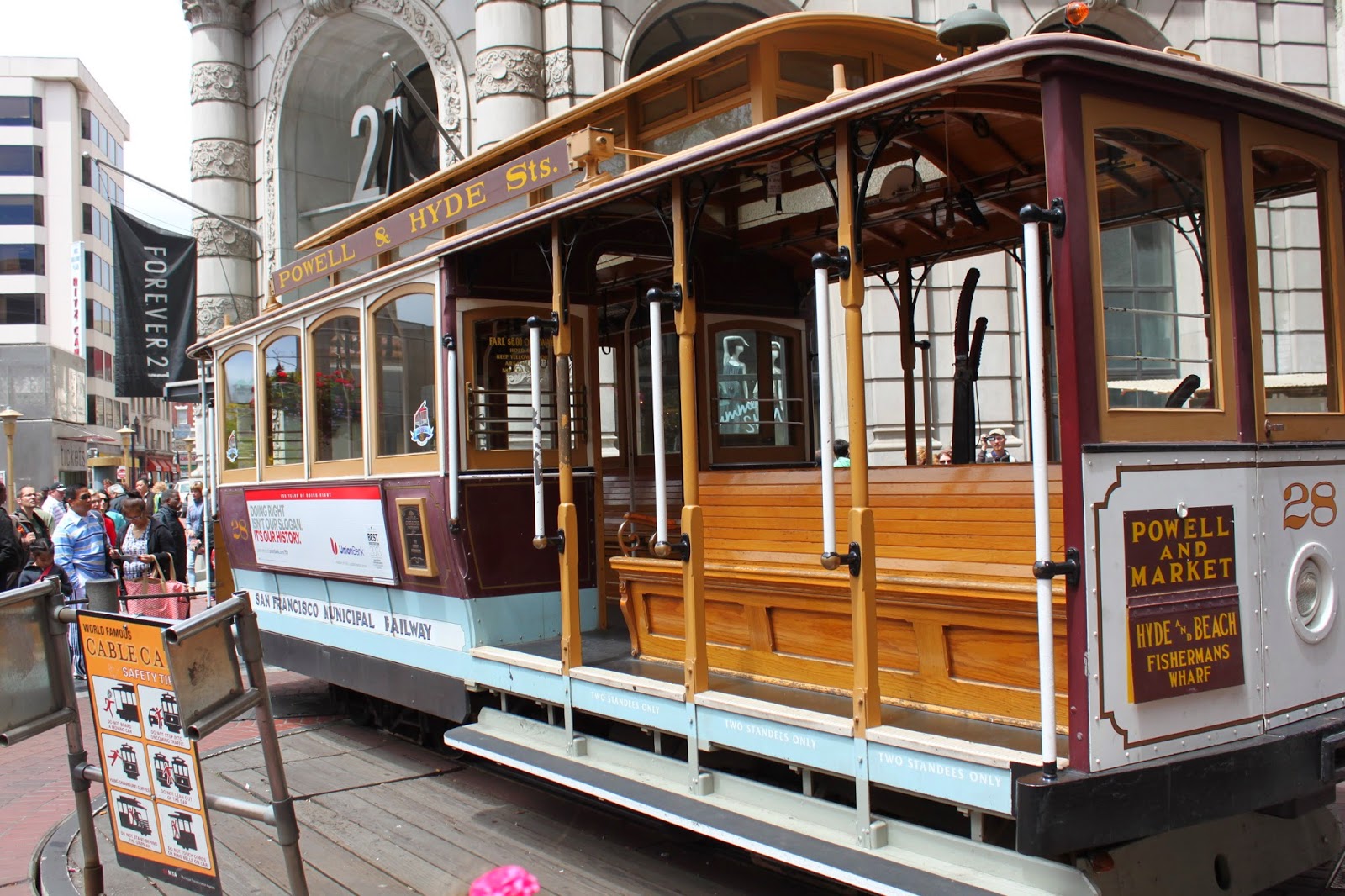 After what felt like forever it was our turn to load! We weren't lucky enough to get a seat on the outside so we went inside. Andy and I ended up standing while the kids sat. 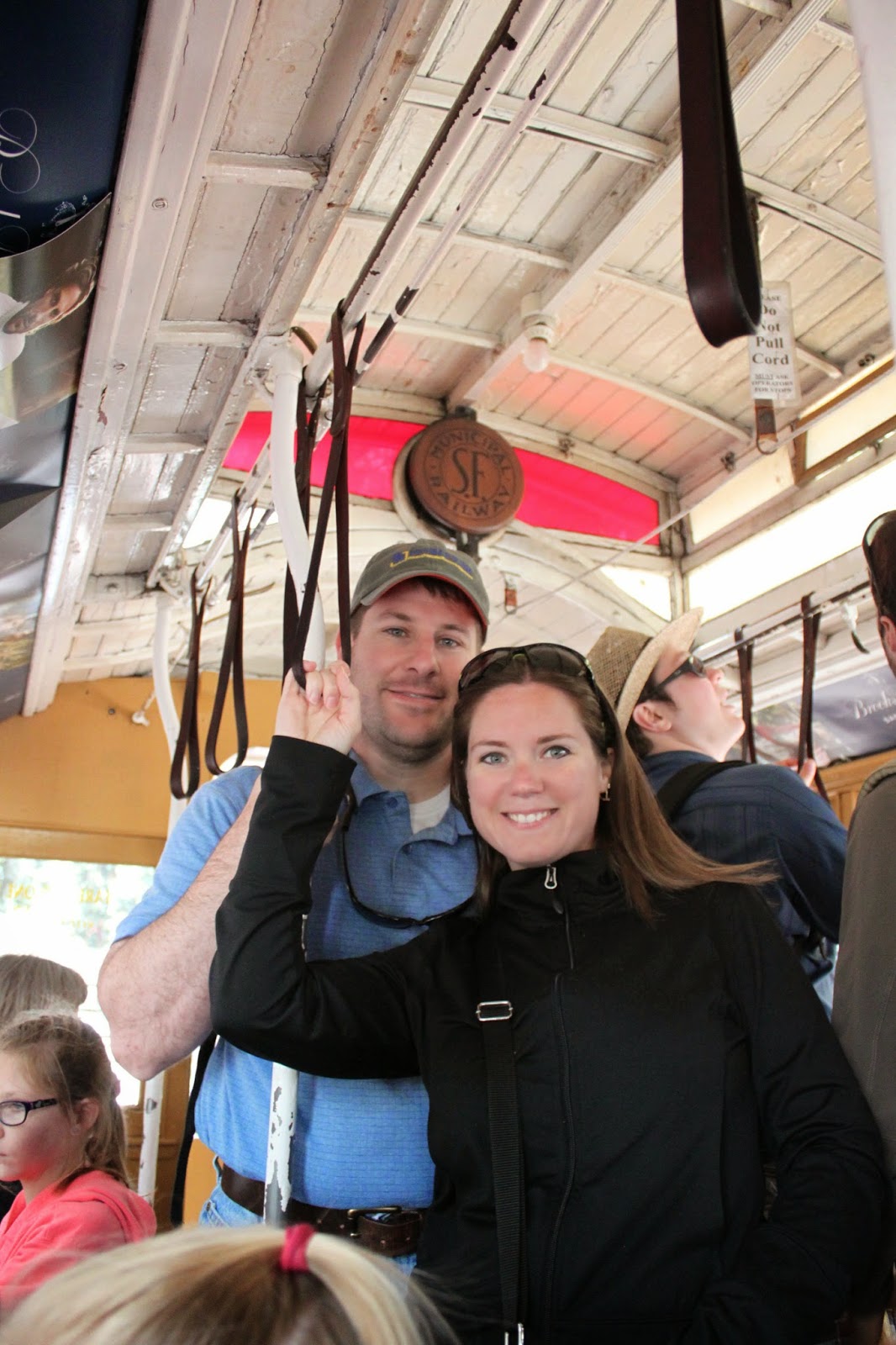 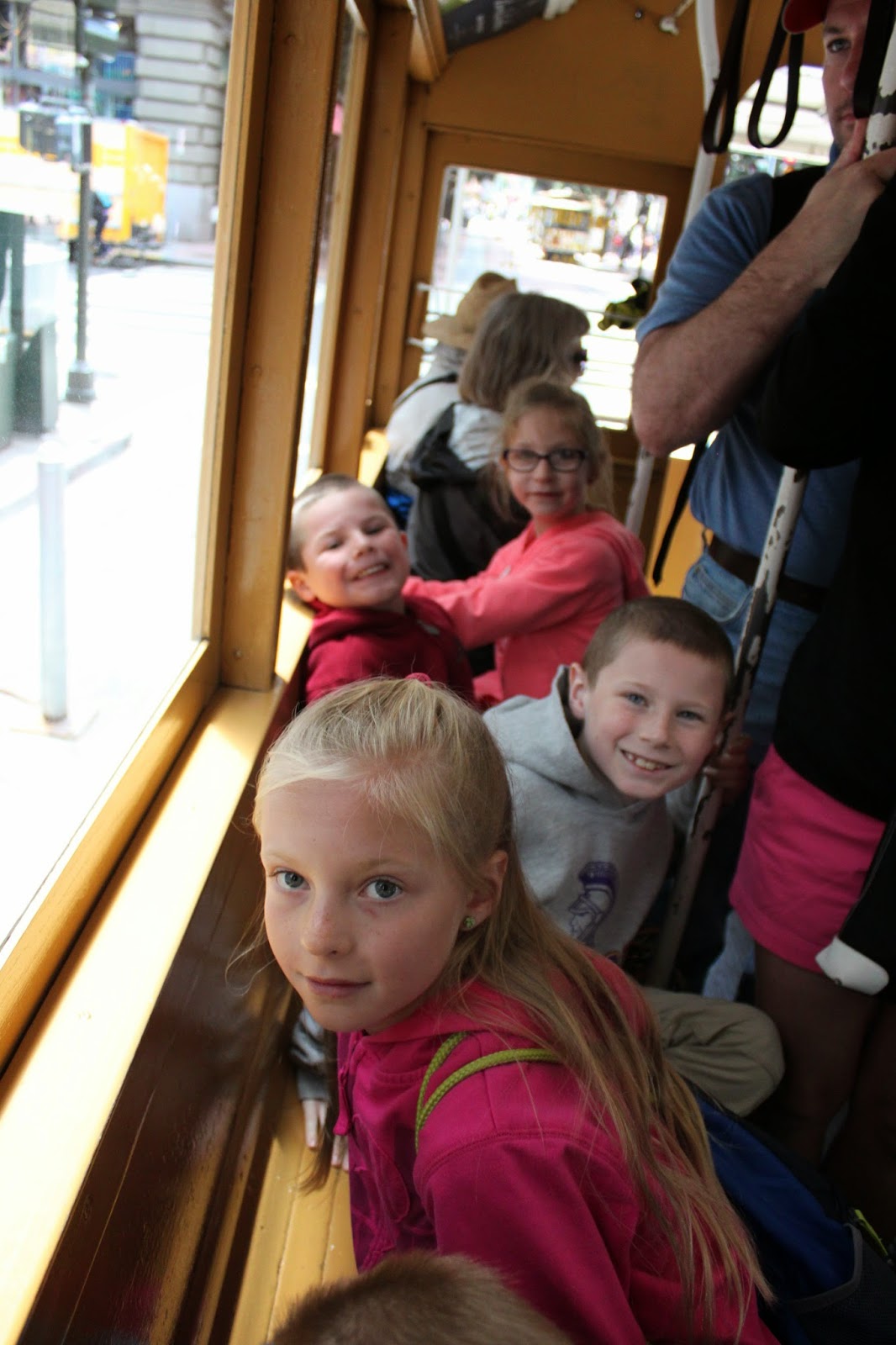 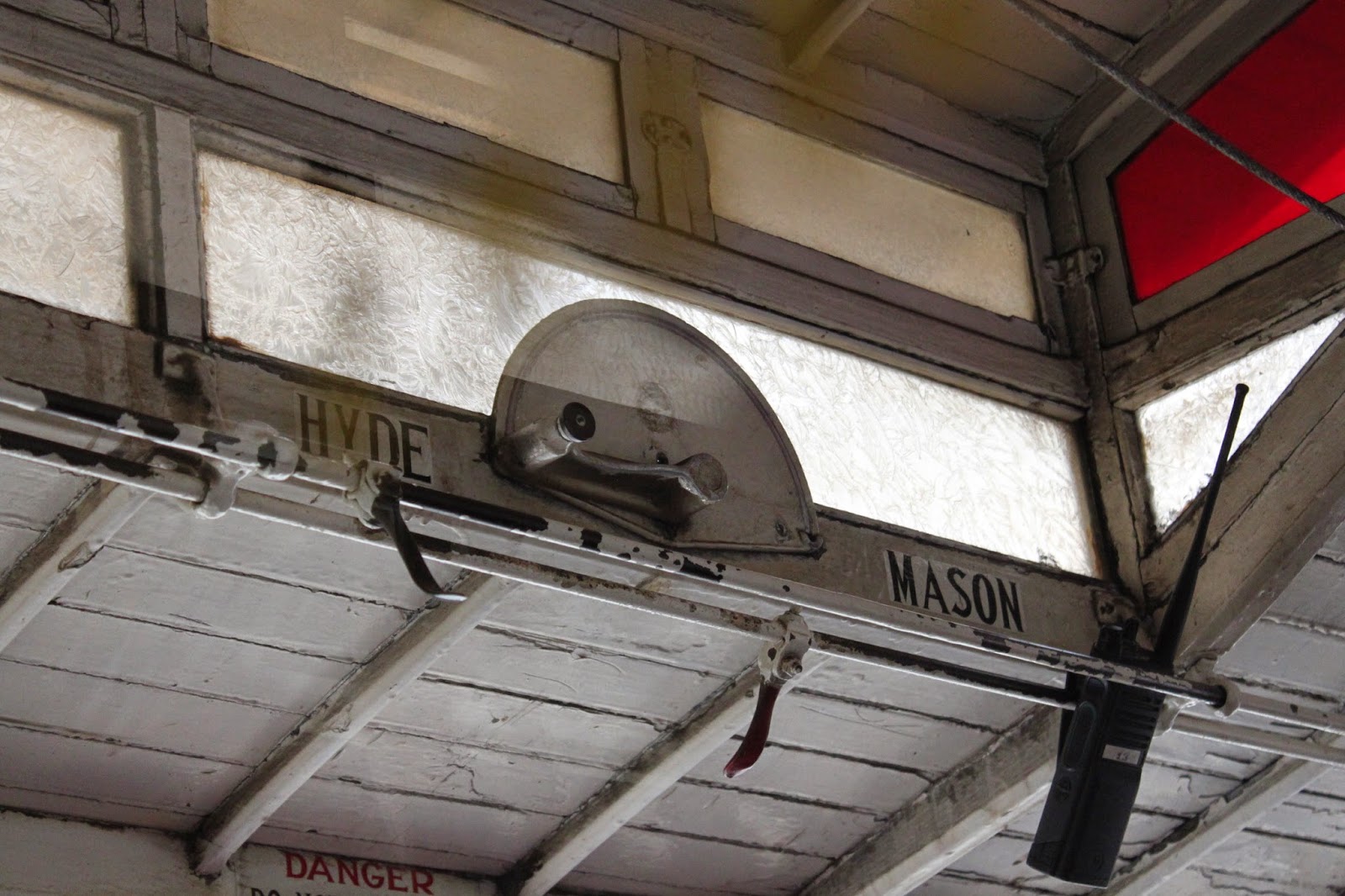 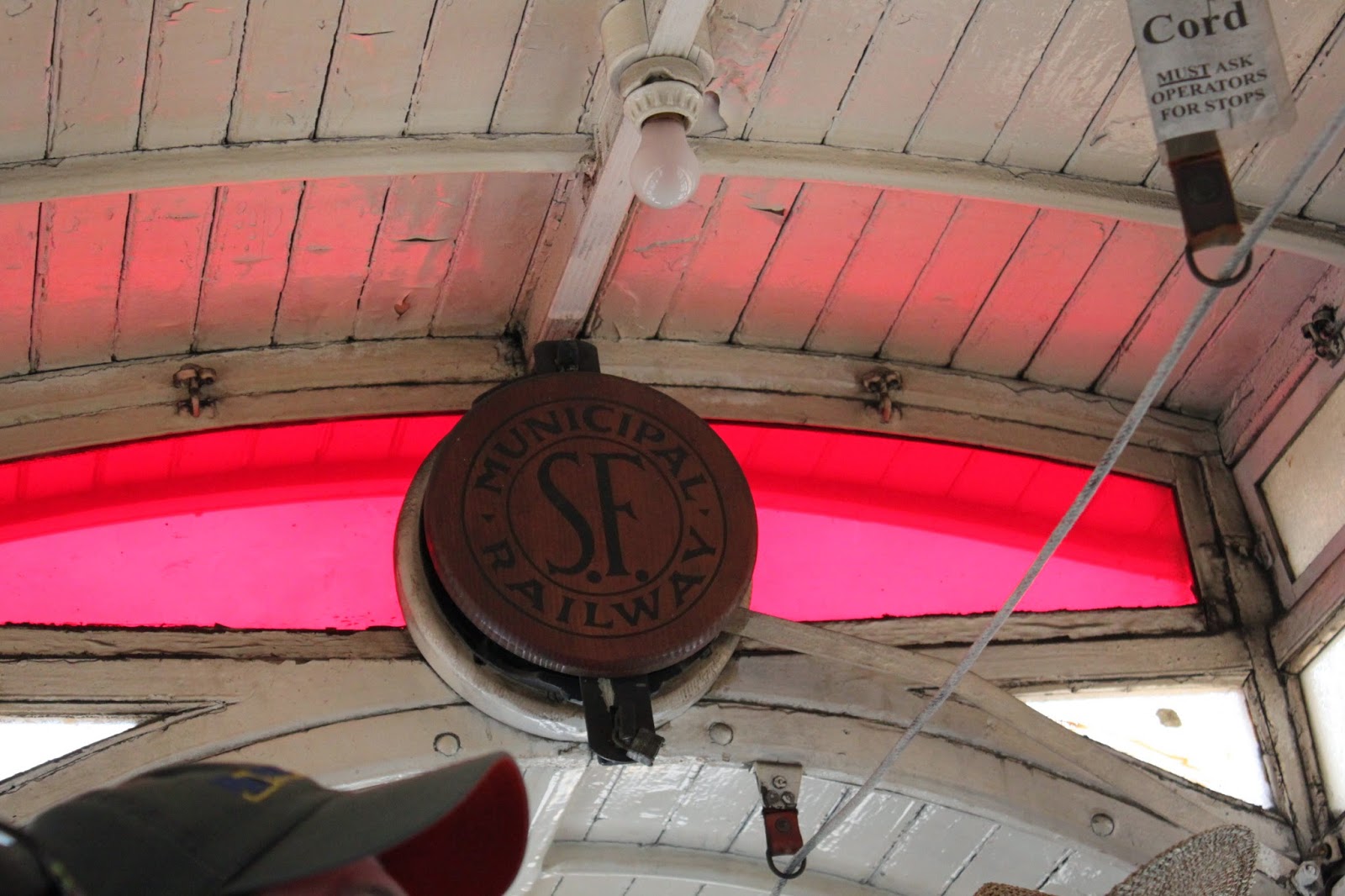 It was really neat inside the cable car! But man did it get crowded! The cable car stopped several times and kept picking up more people. We were crammed in there like sardines lol! We did get to see several things while riding. It was hard taking pictures but I got a few. And I admit that there were several times I wasn't sure the cable car would make it up the hills. But it did!


Crazy hills that look so small in my pictures lol! 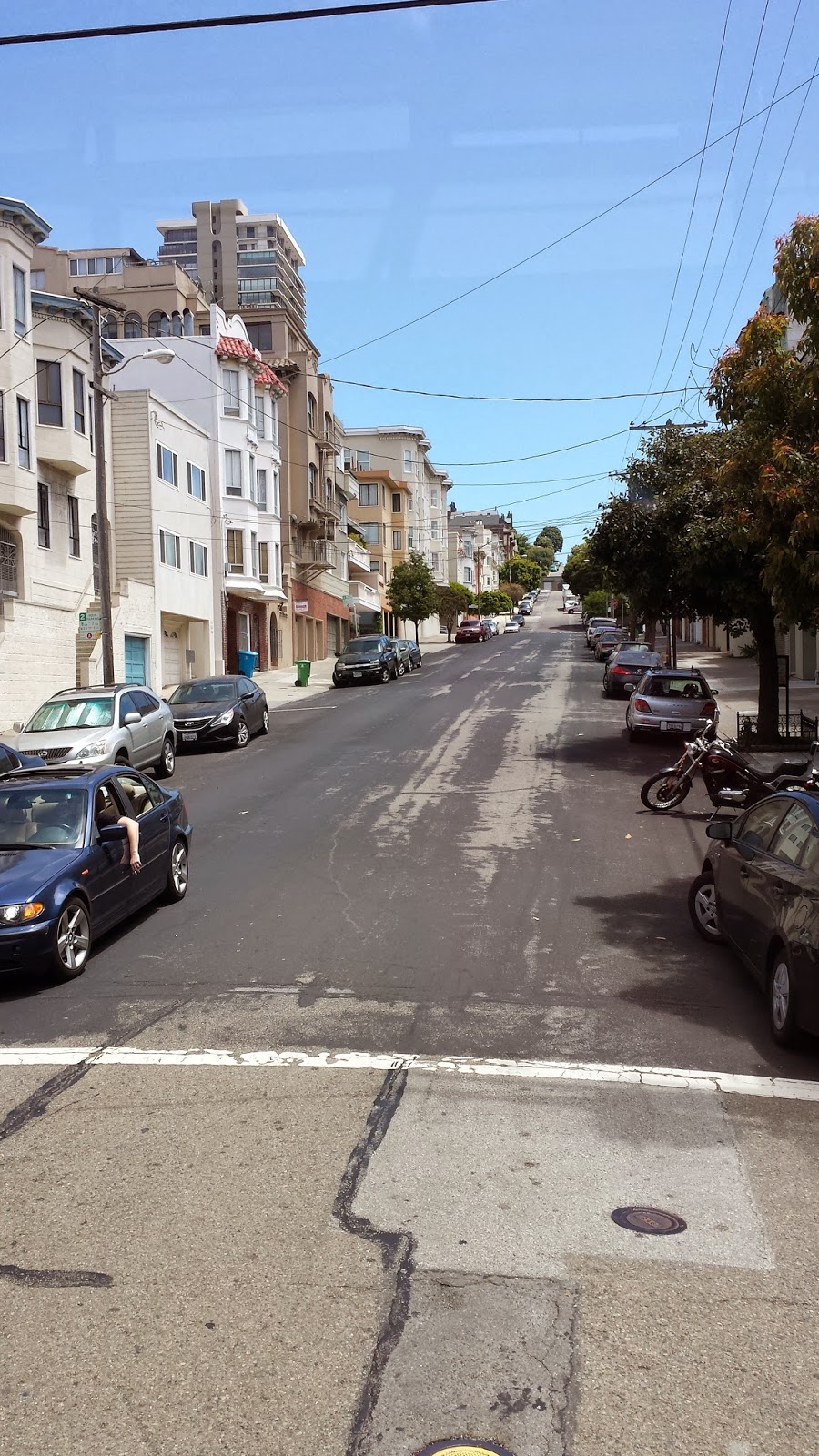 Coit Tower and the Bay Bridge in the background! 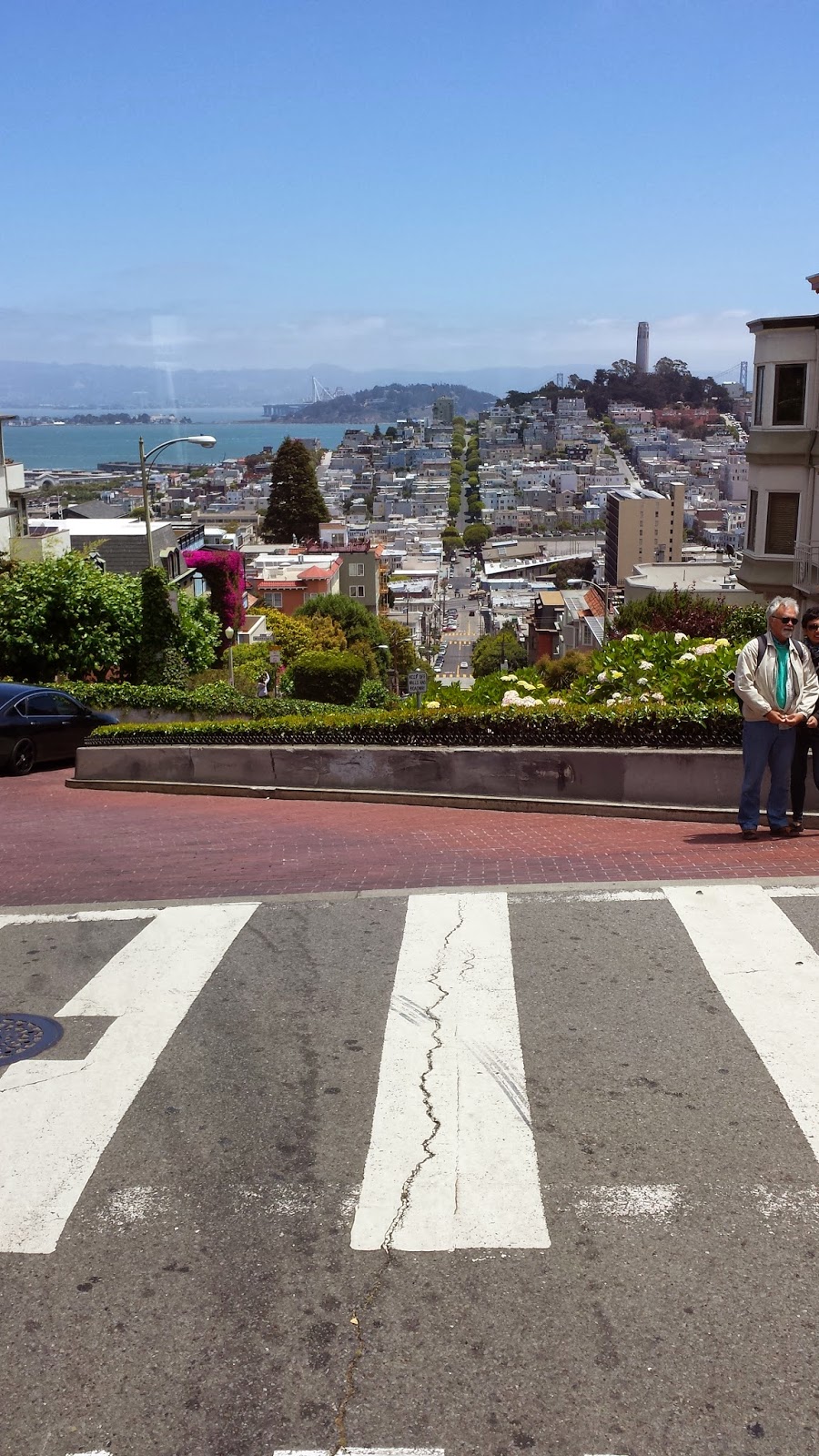 See the Golden Gate Bridge way in the backgound?! 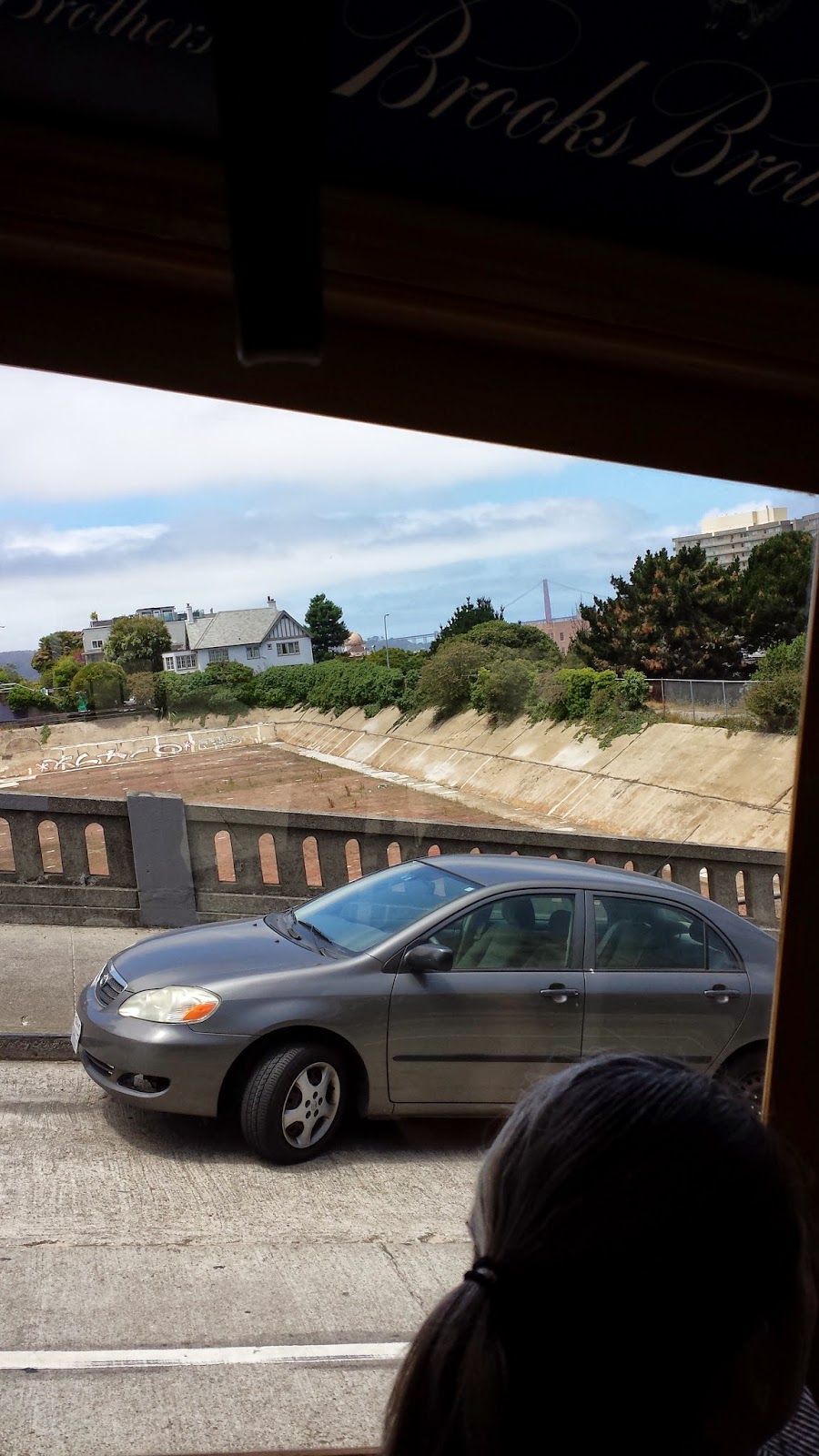 The Goddess of Victory statue atop the Dewey Monument! 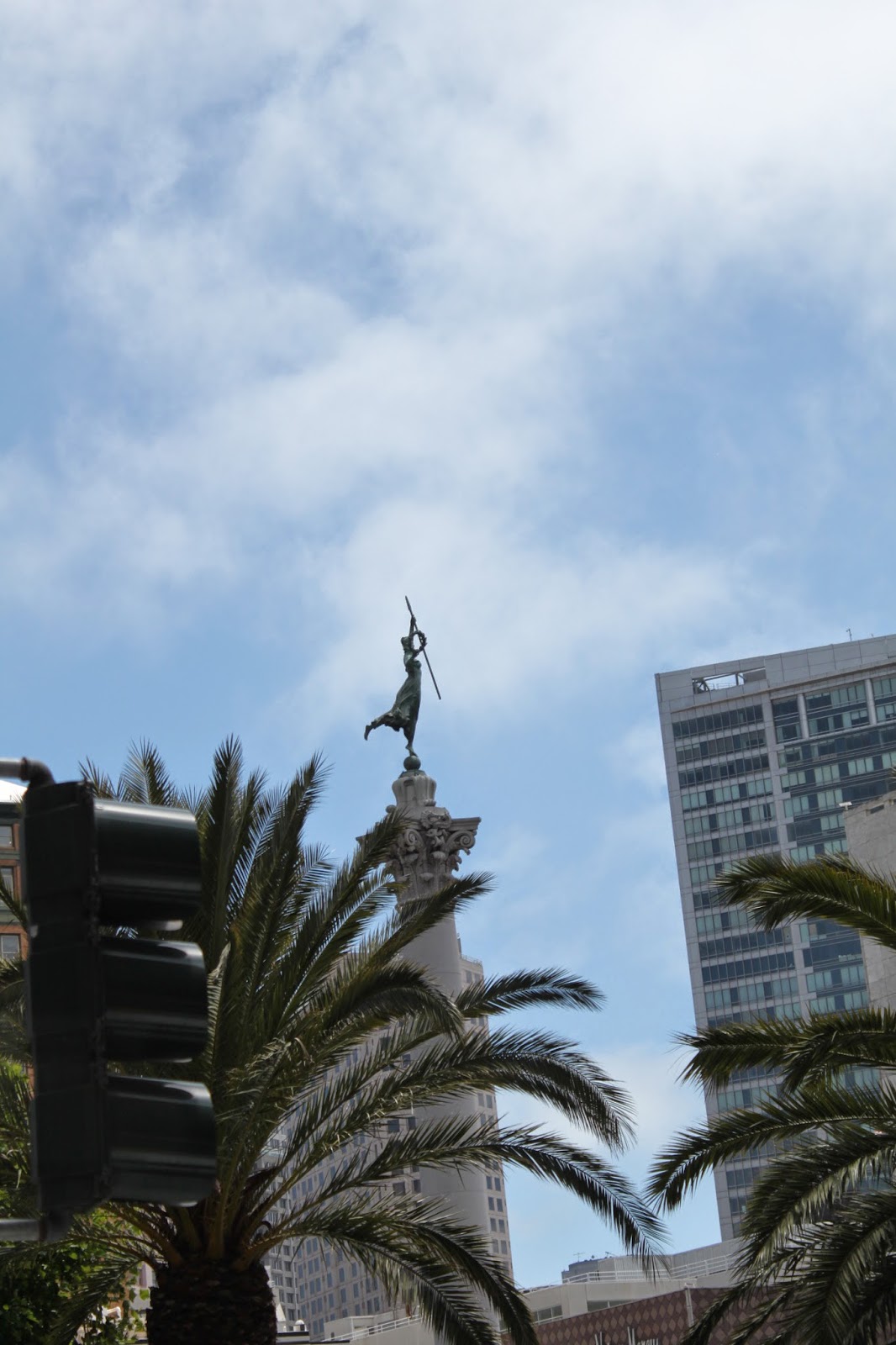 We rode the cable car as far as it would go to Fisherman's Wharf. 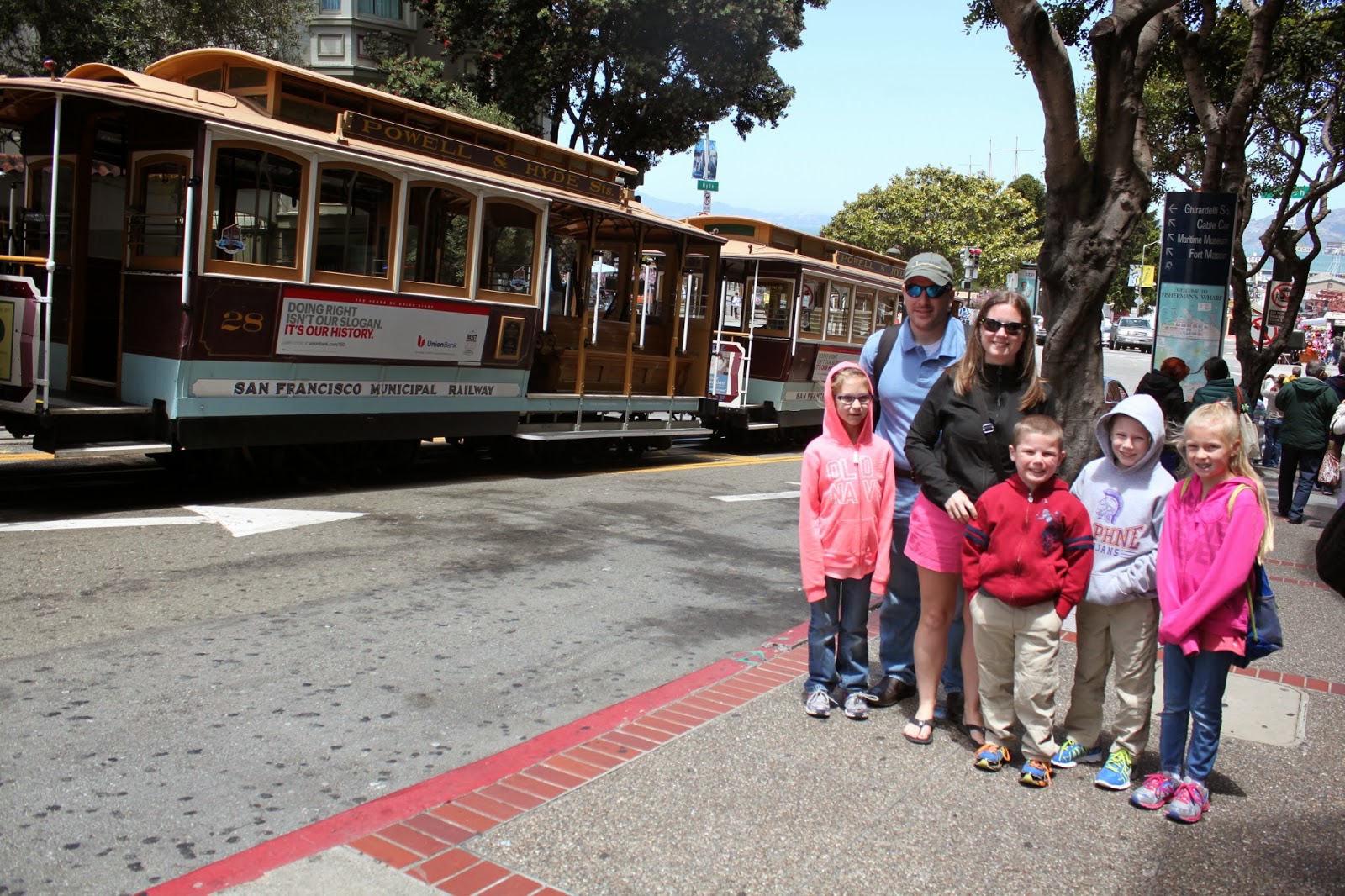 Since I'm just talking about the cable cars in this post I will tell you about Fisherman's Wharf another day. But after our long day there it was time to catch the cable car to take us back to Union Square. By that time we were all so tired and freezing! And my poor Hayden was starting to not feel good (he starting running a fever the next day). We get to the cable car turntable where we are supposed to get back on and the line is HUGE!!! We waited an hour and a half to catch a cable car. It was INSANE! It seemed like they were running so much slower than they were that morning. Luckily there were a few entertainers there (it's amazing how these people will entertain in the street for money).


Me and Stephanie! Love her and love this picture of us!!! 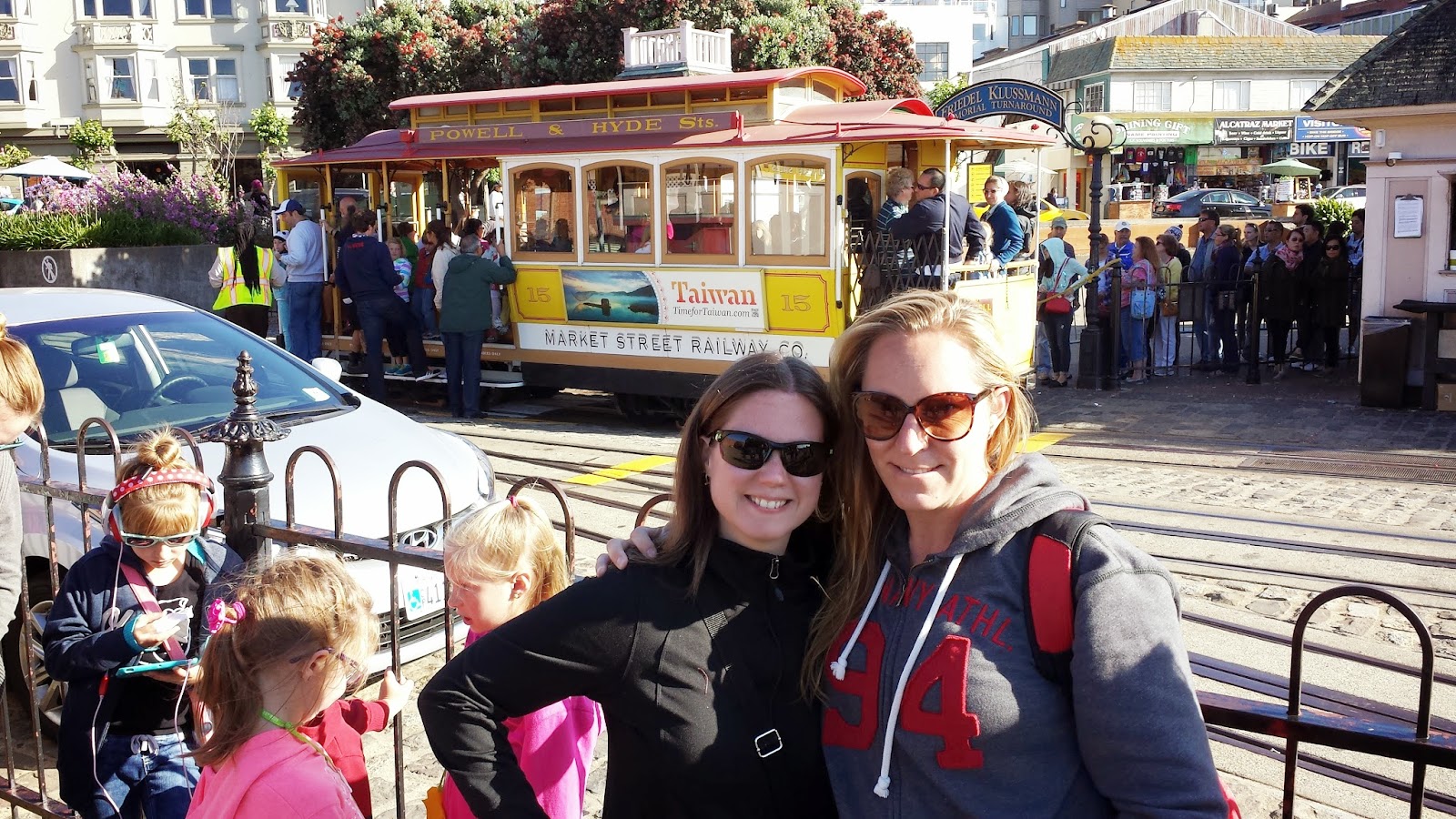 While standing in line we had an awesome view of the Golden Gate Bridge...although it was far off! 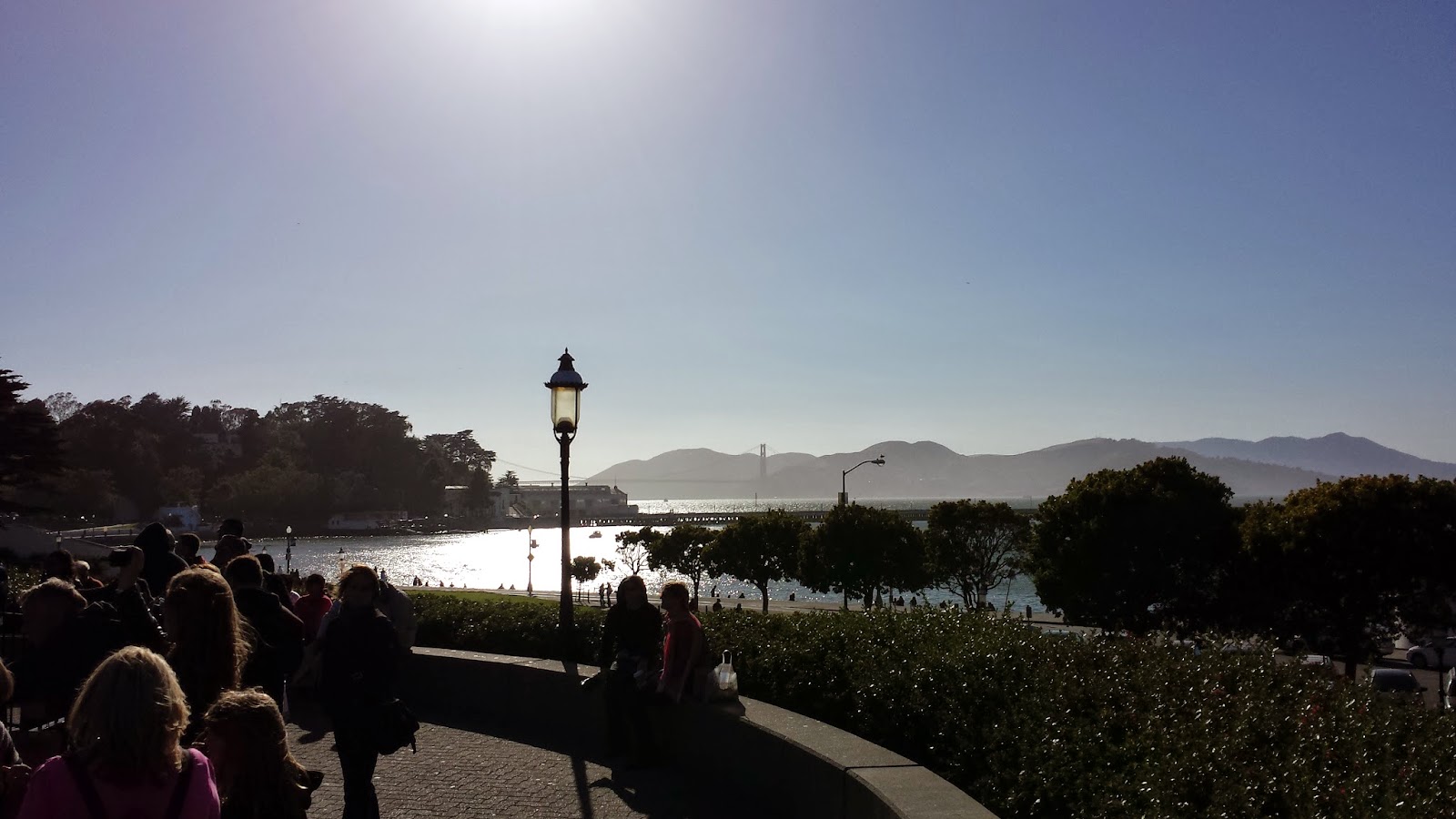 FINALLY we made it on a cable car! And this time we got the outside seats! 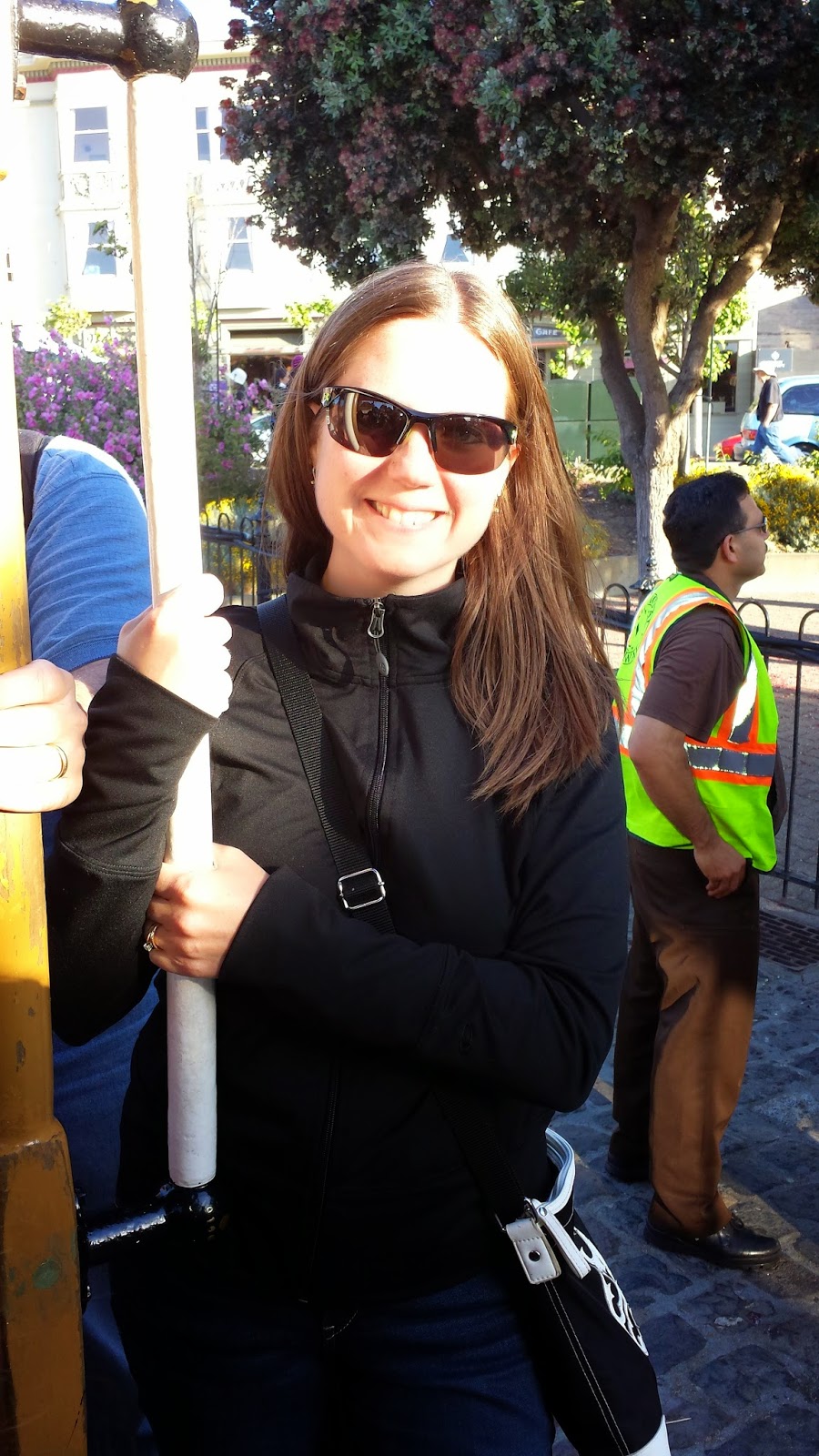 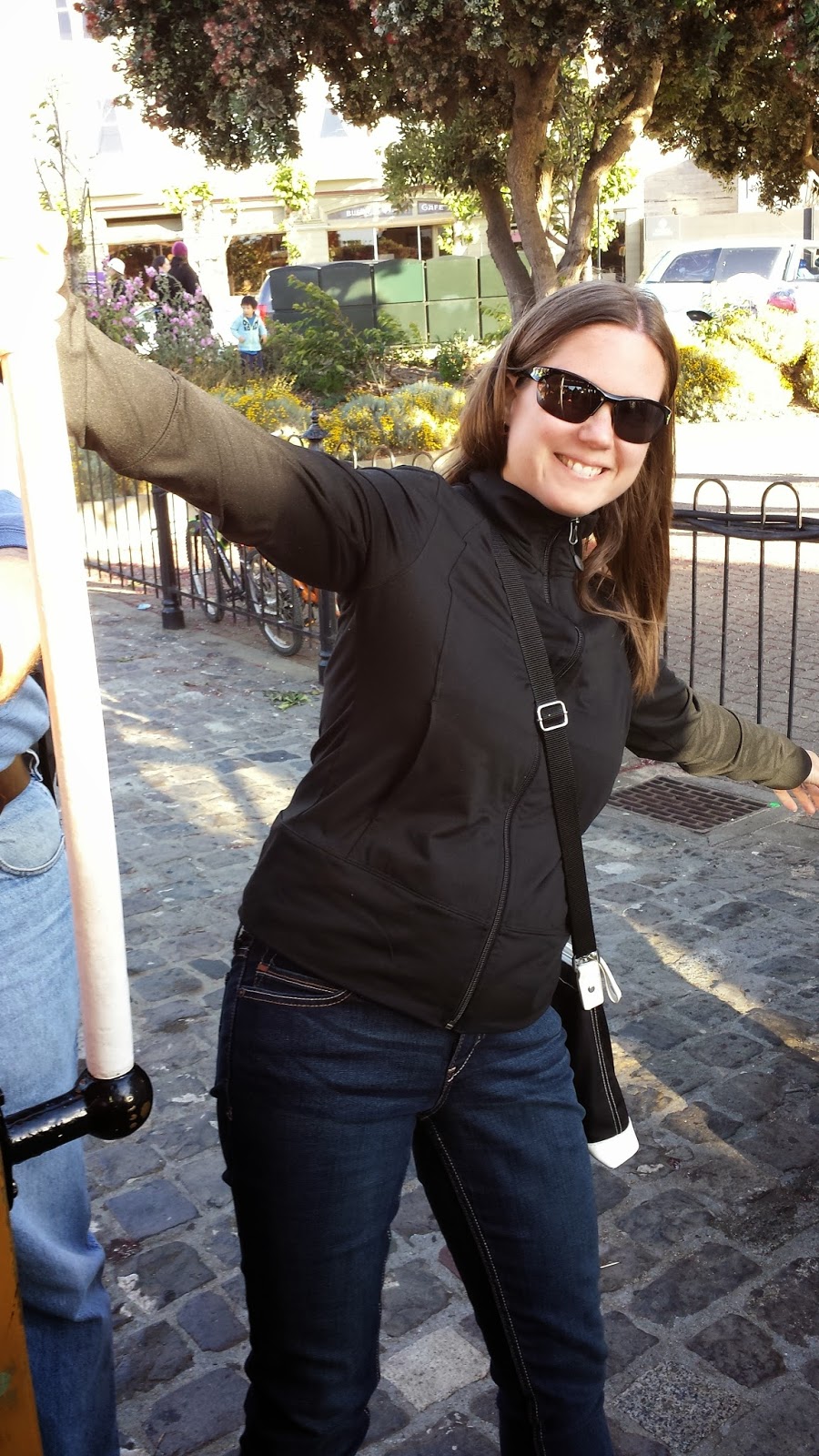 The ride back was just as fun but we were all just ready to be home. We were tired and done for the day especially the kids!

I am glad we rode the cable cars so I can say that I did it. But will I do it again? No! The lines were just way too long. We spent a good 2.5 hours in just waiting in line and riding the cable cars that day. I am glad we all got to experience it though. But it's a one time deal for me!

QOTD: Have you ever rode the cable cars in San Francisco? Would you do it again?