Well last week marked the first official week of the fall half marathon training season for me! Me and my friend Paige are training a group of ladies to run one of our favorite races (this will be my 4th year running this race)...the Gulf Coast Half Marathon in Mandeville, LA! Saturday was our first long run of 7 miles!

We were all super excited! I got our route all mapped out and we had a water stop all set to go. But then Friday things started to go downhill. The weather was not looking too promising for Saturday morning. There was an 85% chance of thunderstorms at the time we were supposed to run. And it was supposed to rain all day. We went to bed with the promise to make a call about an hour before the run time on whether we would run or reschedule.

Well guess what I woke up to? No, not my alarm.....thunder and lightning! I immediately checked my phone and had several texts and emails. The radar looked like the thunderstorms would clear after that storm. So we delayed the run by an hour.

Because so many of the ladies didn't want to chance it there were only 3 of us that showed up to run...me, Paige, and Donna. Paige's boyfriend Billy was there too riding his bike (and being our bodyguard and photographer!).

The run started out great. It was not raining although there were storm clouds in the sky. We had to dodge and run through puddles. But we were determined to get in our 7 miles! 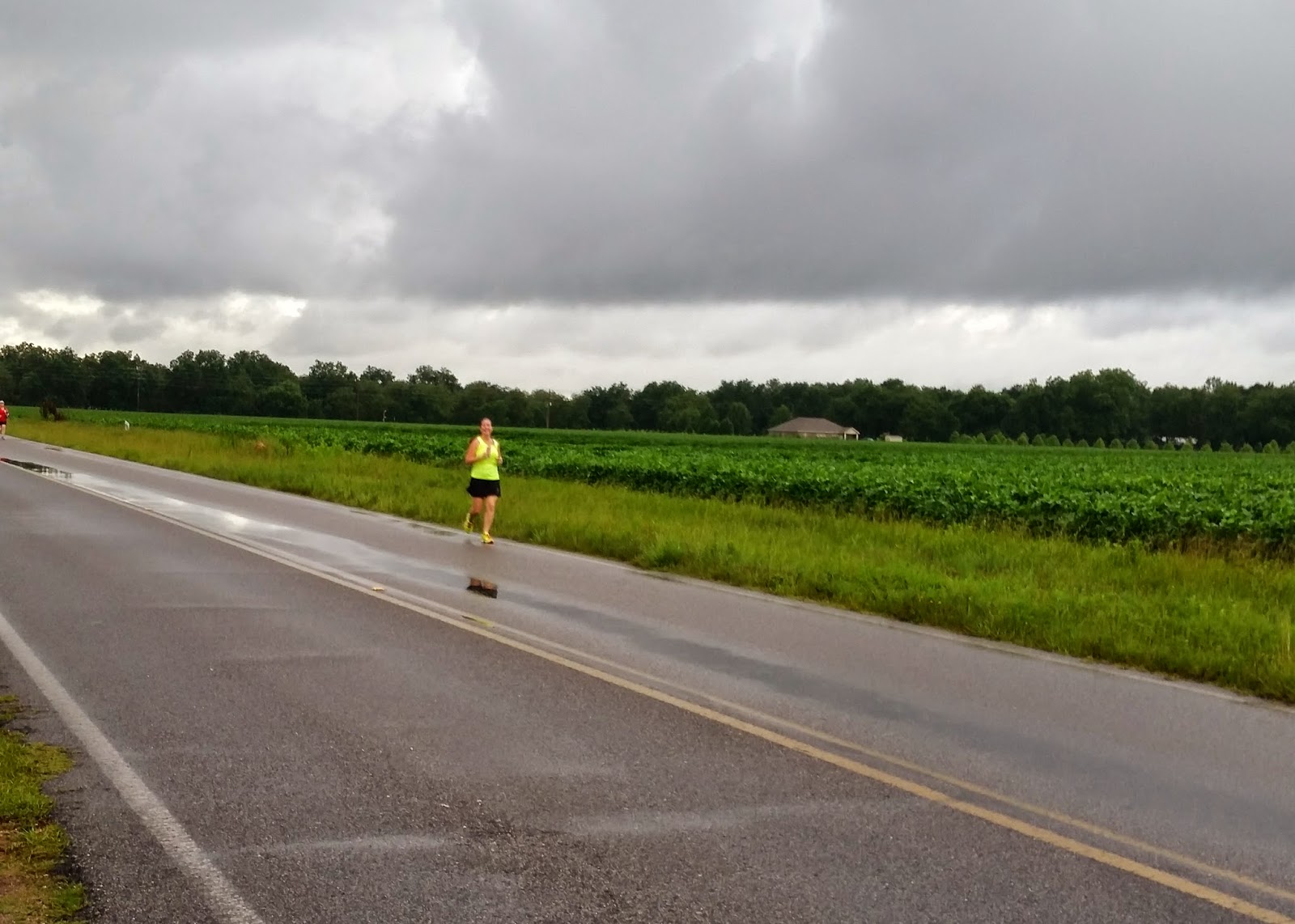 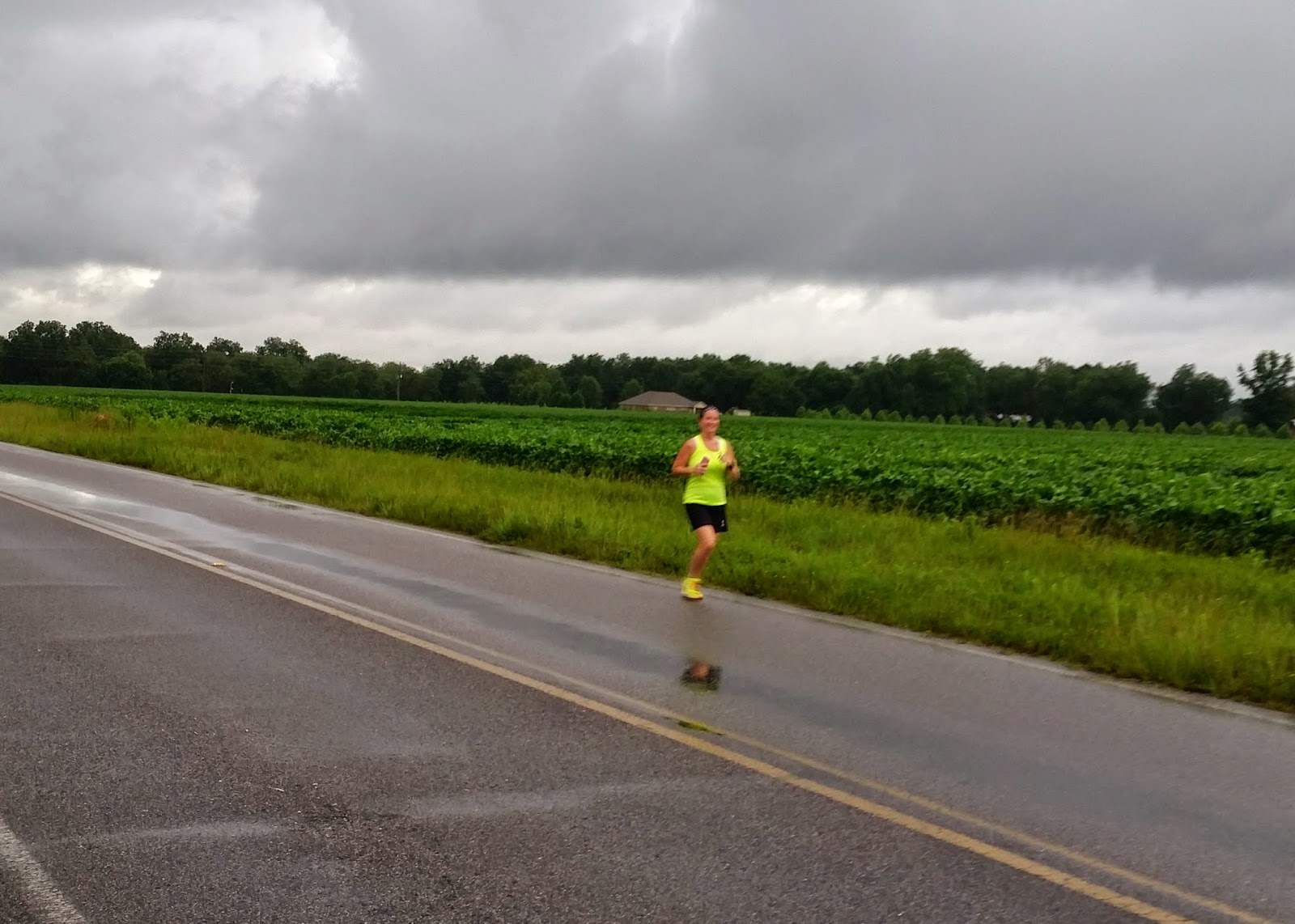 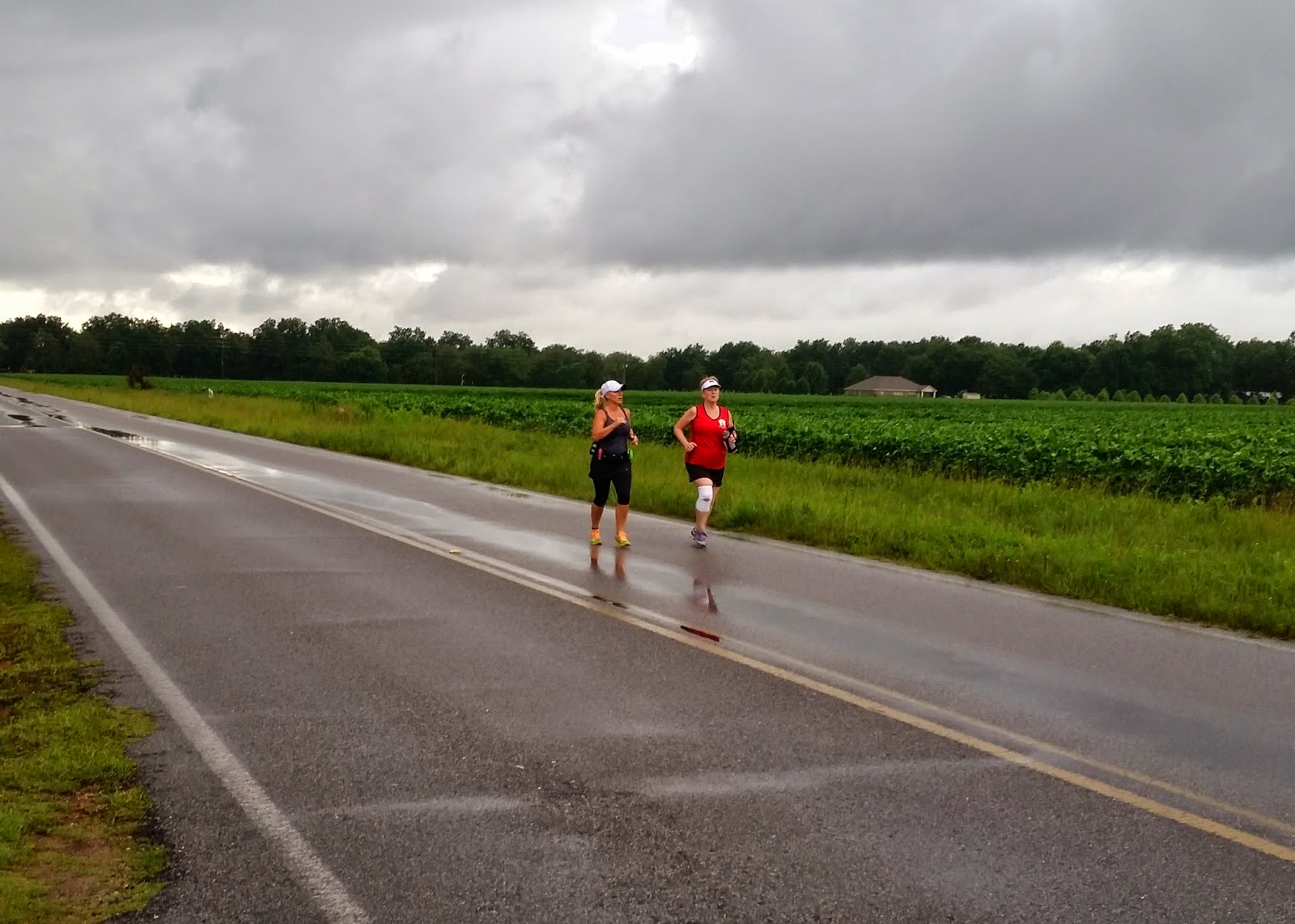 Paige and Donna were doing a run/walk so I ended up running ahead and on my own for the majority of the run. Billy said I was giving him a good workout since he was riding back and forth between us to check on us!

Here I am around mile 3! I was feeling great! And yes I am holding a ziploc bag in my hand! I had my phone in there in case it started raining! ;-) 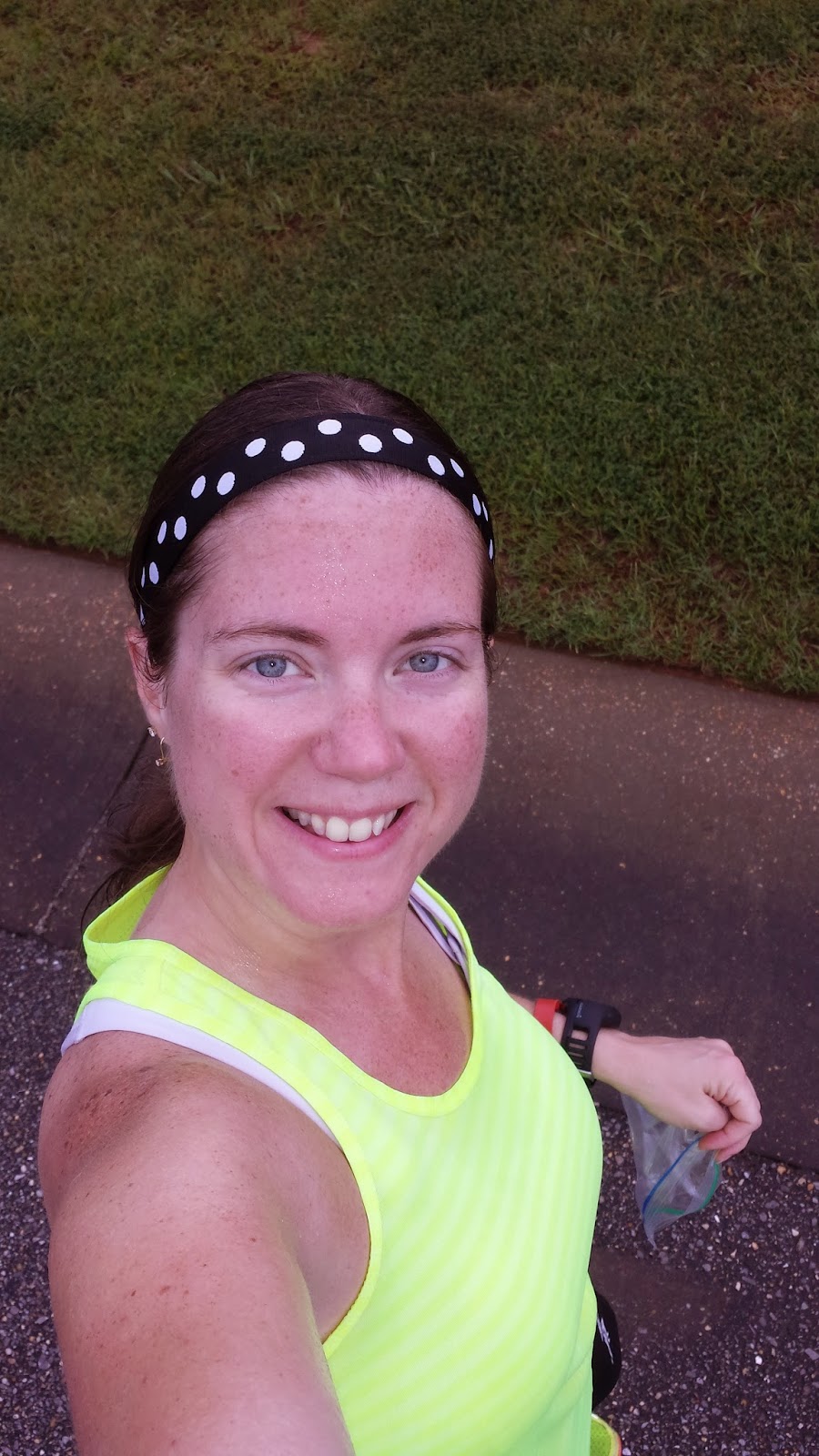 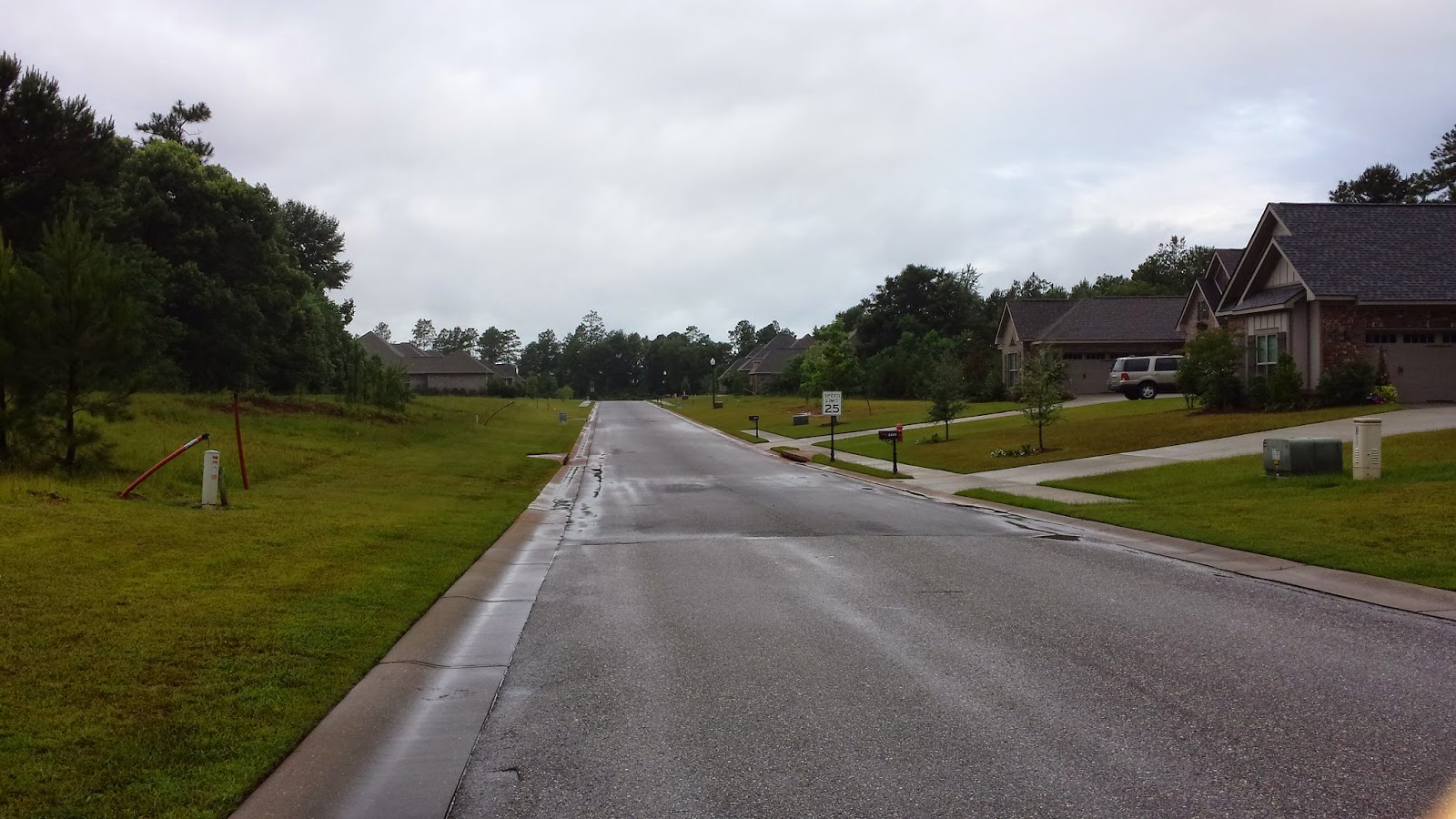 You can see how wet the roads were. They weren't slippery but I had to watch for puddles. I tried to go around the puddles as much as I could but there were a few times I had to run through them due to traffic.

At mile 4.5 I stopped at Billy's truck for water. He had a water cooler and cups in the back of his truck. The water was still cold and tasted so good! 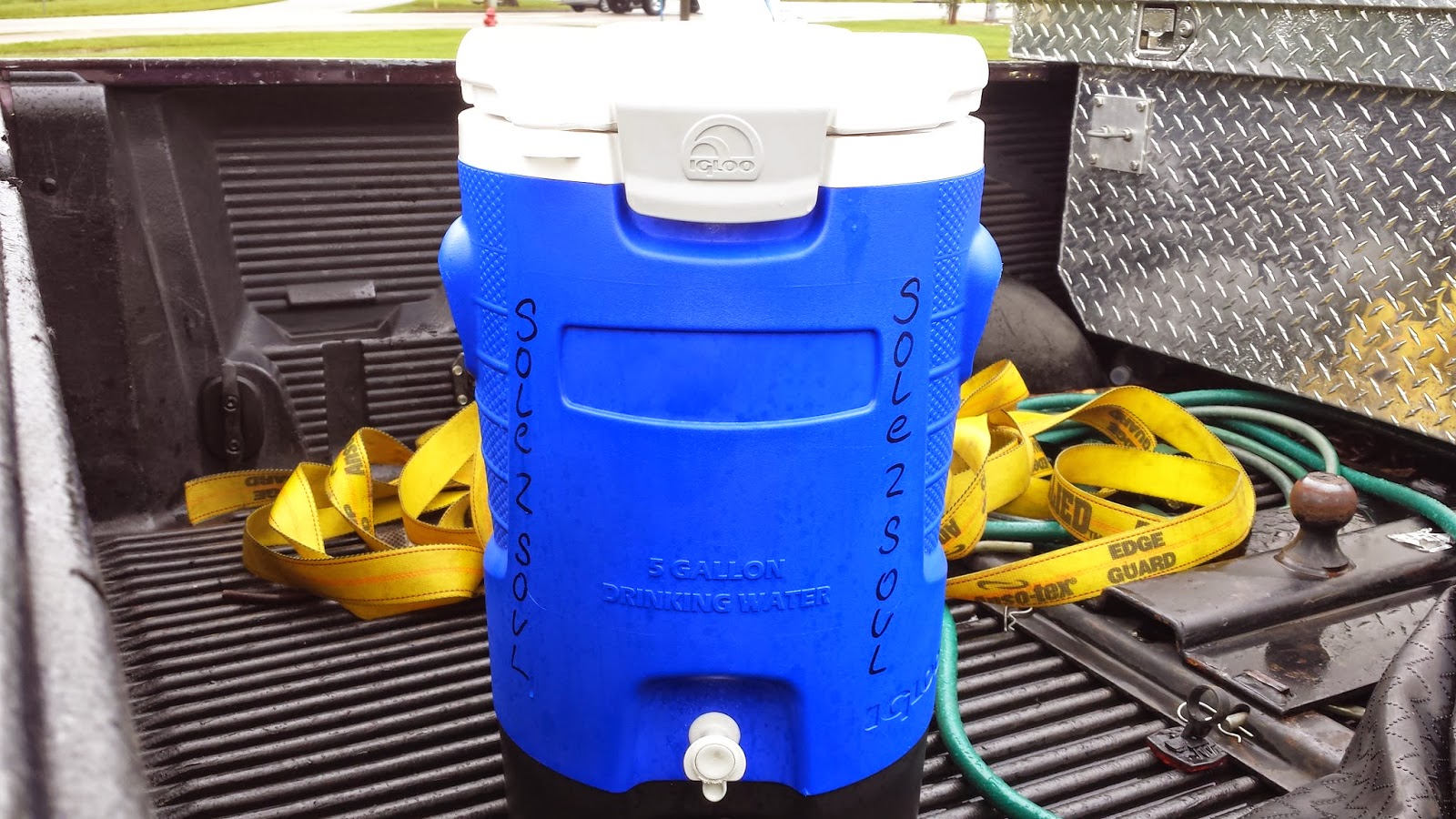 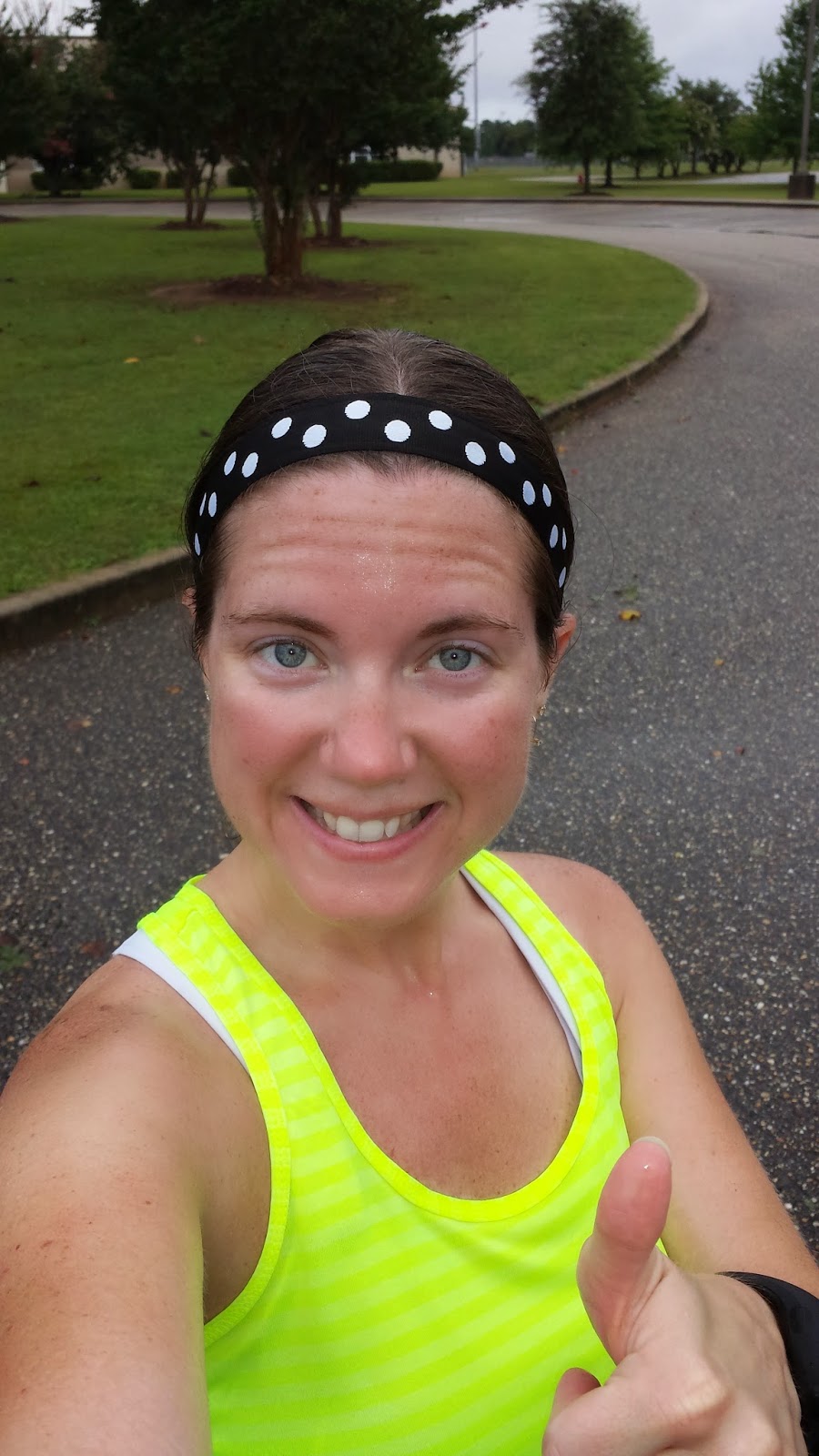 I didn't waste much time at the water stop. I only had 2.5 more miles to go! I entered the neighborhood that I run in about twice a week. I only had to run about half of it before I turned around. I was still feeling good and I could tell that my pace was picking up a bit. My legs seemed to know that I was almost done! I made the turn around, made it back out of the neighborhood, and then I saw Paige, Billy, and Donna! We cheered for each other as we passed.

Then I saw a biker coming my way. He gave me a thumbs up sign and that was just the push I needed! I started running faster. And then I saw something on the sidewalk that scared me to death! It was a crawfish! And he had his claws out and raised at me like he was fussing at me! Lol! 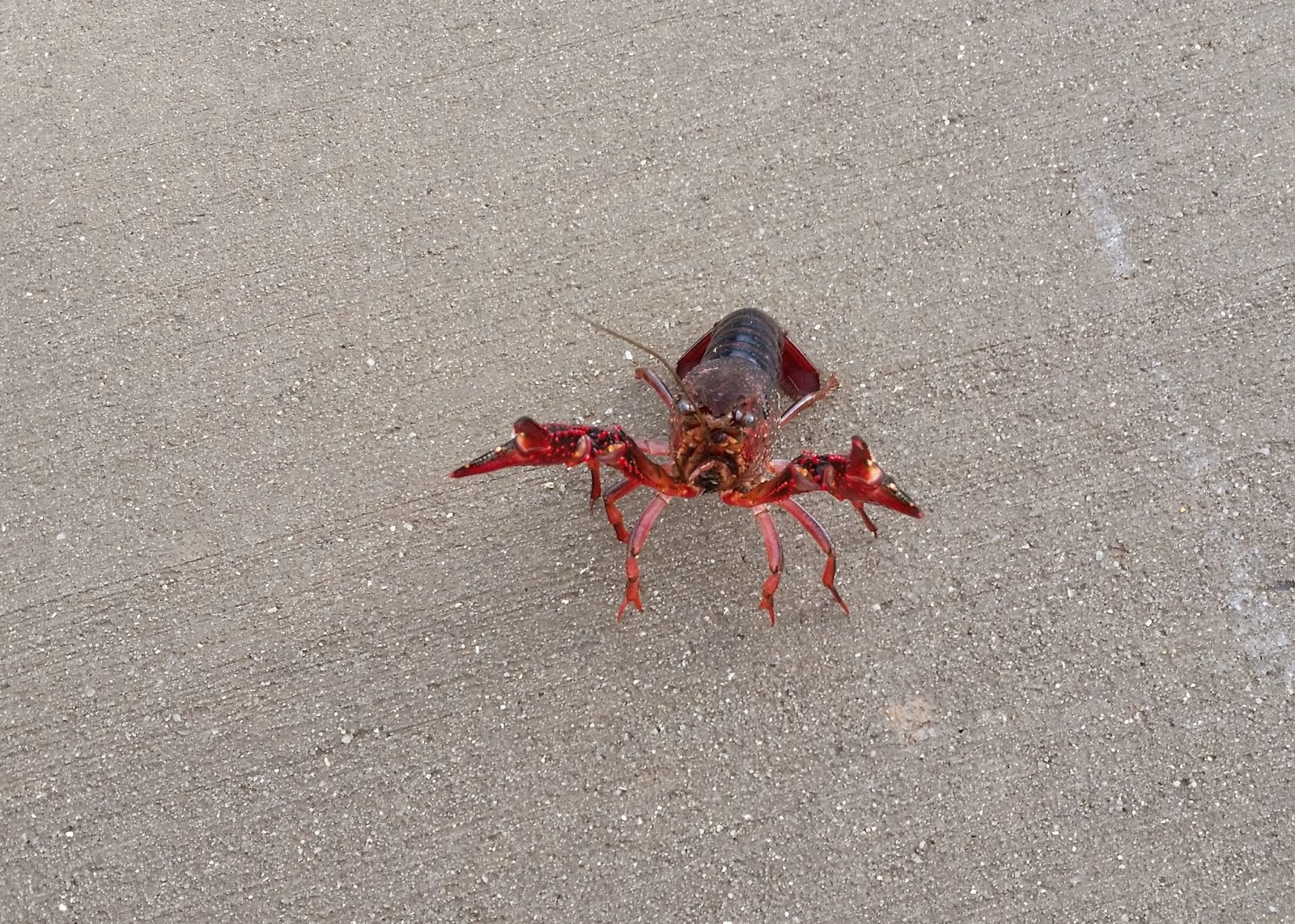 Luckily I was almost done after seeing that little guy! My heart rate was high lol!

I did it! 7 miles! It had been awhile since I'd run past 6.2! My legs and body felt great the entire run! 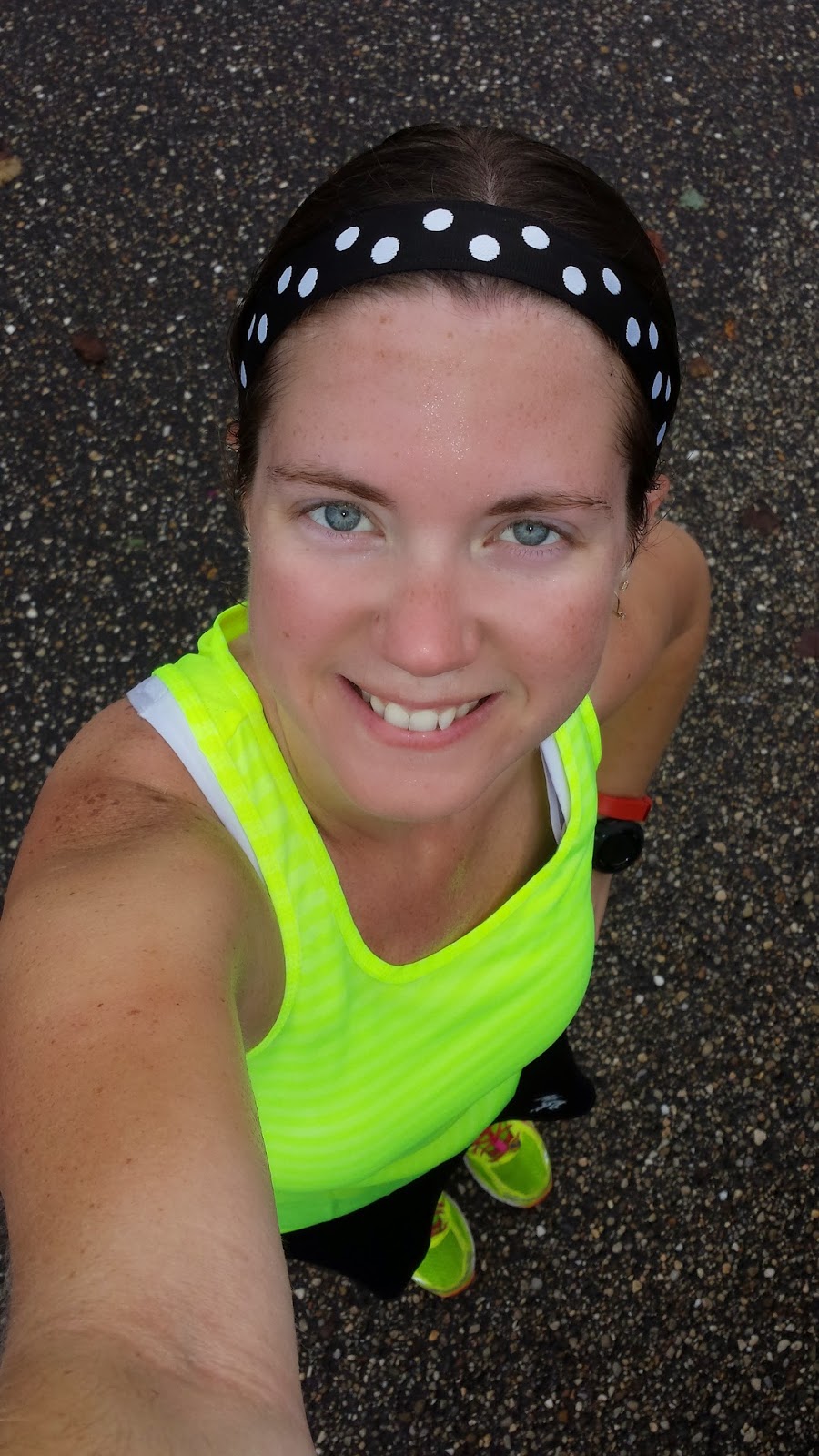 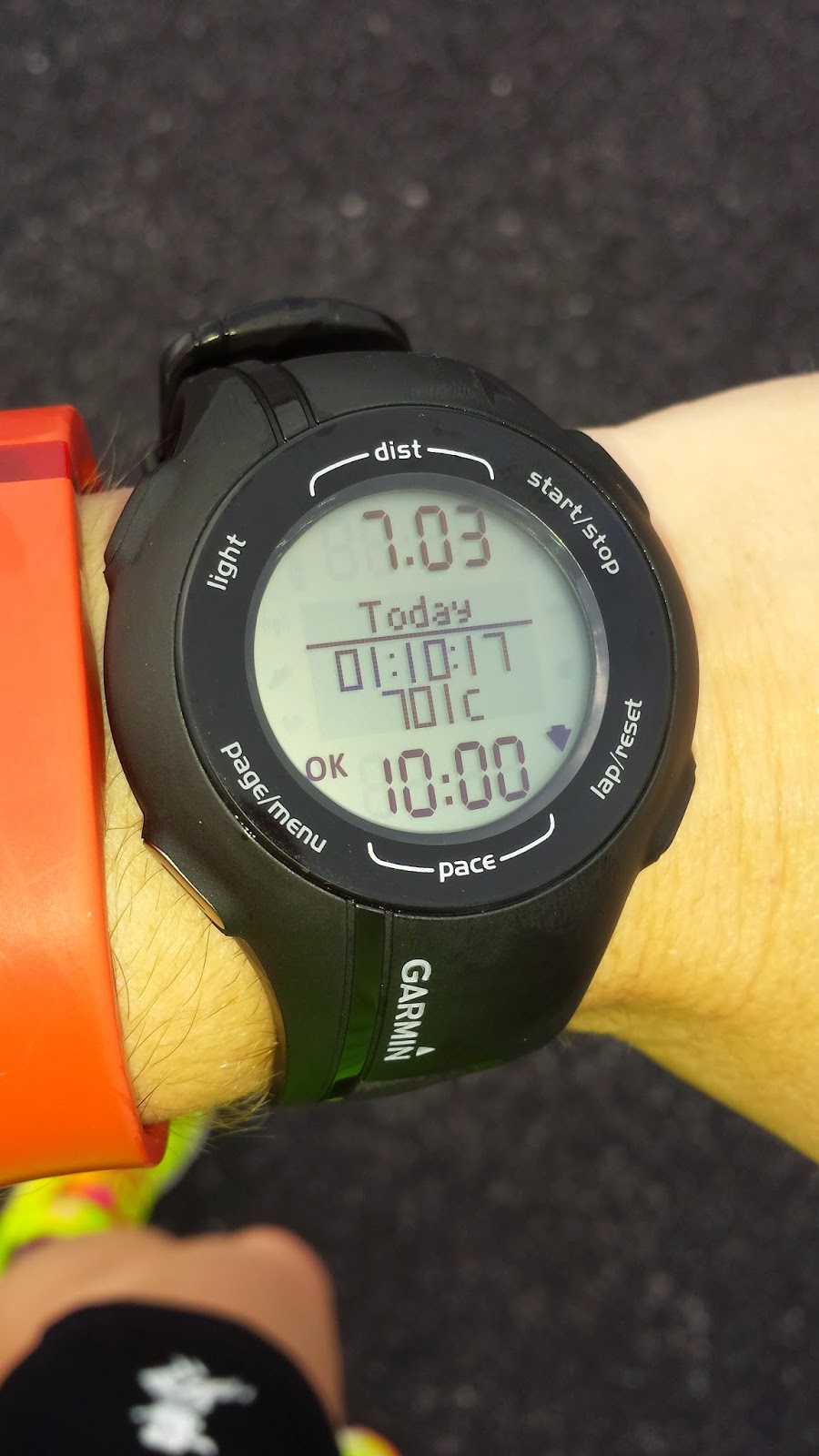 I was thankful for such a great run!

QOTD: Have you ever surprised yourself with how fast you ran?