Just in case you missed it, you may want to read Father's Day Fun Day Part 1 first!

After the museum, we headed to the Pensacola Lighthouse!  Andy and I have always wanted to do this...climb up to the top of the lighthouse.  I remember us talking about doing it when we were dating but we never got around to it.  So I was super excited!  And a little nervous about the boys being able to do it.  We decided to attempt it anyway! 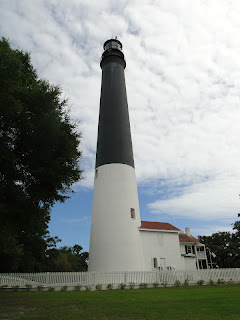 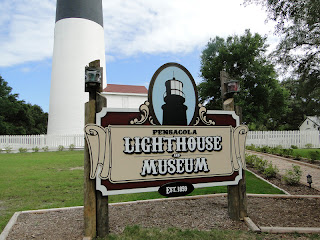 Here's a little history about the lighthouse: 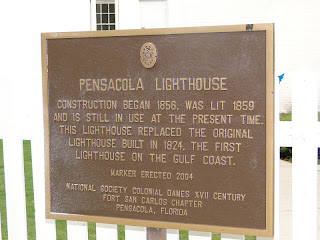 We got to tour the keeper's quarters of the lighthouse first.  That was pretty neat.  And supposedly this lighthouse is one of America's most haunted lighthouses!  It was even featured on the show "Ghost Hunters!"  Watch the episode below.

We couldn't wait to climb to the top!  Admission wasn't bad...$5.00 for adults and $3.00 for children.  There was a rule...you could not wear flip flops or any shoes with an open back.  The boys were good...they had on tennis shoes...but Andy and I had on flip flops.  We were getting sdisappointed until they said we could climb barefooted.  So that's what we did! 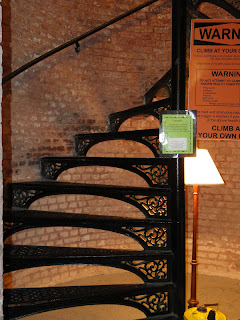 Here we go!  It was 177 steps (equivalent to 15 flights of stairs) to get to the top!  Now remember...I had run 6 miles that morning.  But I was determined to do this!  Another rule...people coming down had the right of way so when we were going up we had to move all the way over to the right side of the stair to let them through.  This was a little challenging with a 4 and 6 year old but they did great!  There were several windows going up the tower and you could step off the stairs into the window to take a break or look out. 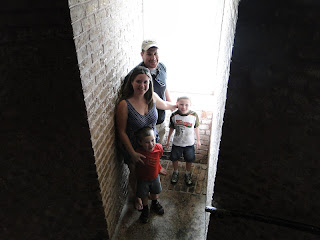 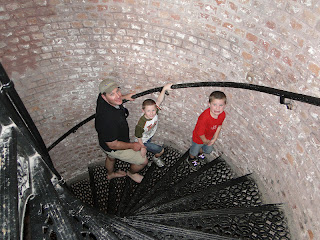 Going up actually wasn't that hard.  The stairs were not steep at all.  The most difficulty we had was moving over to let the people coming down come through.  We finally made it to the top...and what a view we had!!!  It was gorgeous!!! 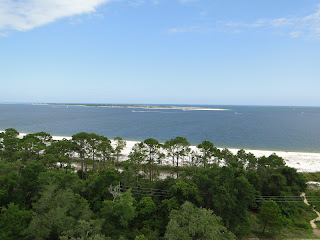 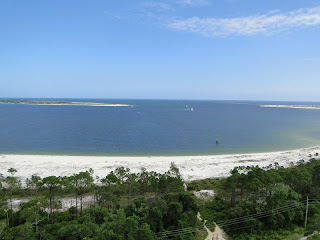 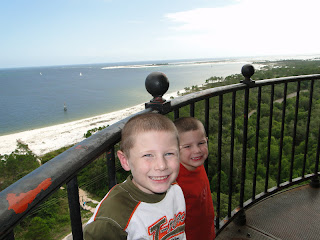 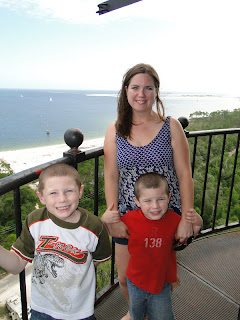 In the far distance we could see Fort Pickens.  I zoomed in with my camera to get a better view. 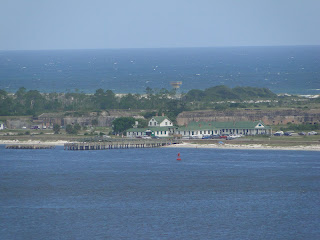 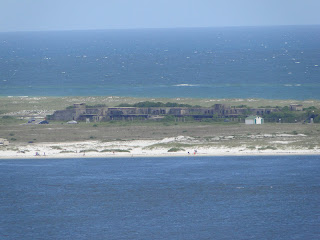 And yes I just had to have a picture of me and Andy's bare feet lol! 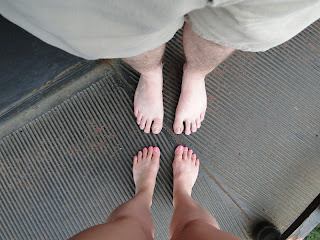 We stayed at the top of the tower about 15 minutes.  We talked to one of the lighthouse's workers.  He told us that you could reserve the top of the tower to watch the Blue Angels practice.  He said one of them even flew right next to the tower and you could get great pictures of the planes from above.  This is a definite must for me and Andy to do one day!!!  I think it would be too loud for the boys though.  ﻿Andy is afraid of heights so he was a little uncomfortable at the top...and it was super windy so that worried him even more.  But the boys and I LOVED it and weren't scared a bit!

Coming down from the tower was a little more tricky.  You would think it would be harder to go up but it was really harder coming down.  I think it was because of the spiral staircase.  But we made it and felt very accomplished after!!!  I was so proud of the boys for doing this!!! 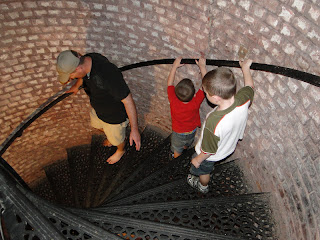 Another beautiful view of the lighthouse and keepers quarters! 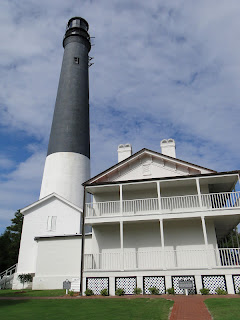 The boys loved this pelican and insisted on a picture with it! 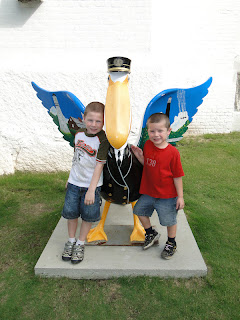 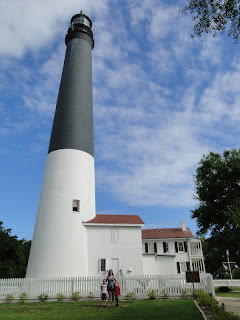 Do I recommend going to this lighthouse???  Absolutely!!!!!

After this, we headed towards home...the scenic way.  We ended up stopping for dinner at the beach in Gulf Shores at an awesome place called The Hangout.  This is a pretty popular restaurant in our area...there are tons of family friendly things AND adult things too.﻿  They have live music and a huge hill of sand for the kids to play on.  The boys had a blast!  And the food is pretty good too!  We were pretty hungry after climbing 177 steps so we got their homemade chips, salsa, and queso dip appetizer.  Very yummy! 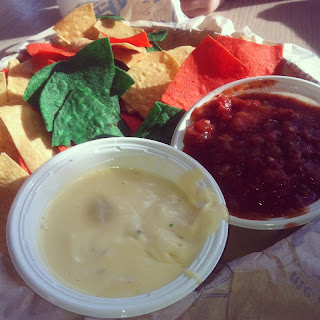 I ordered the "Shaka-Shaka"Chicken Wrap...it had chicken, lettuce, tomatoes, and monterey jack and cheddar cheese in the tortilla.  The "Shaka-Shaka" sauce was really good...it had an almost sweet taste at first and then ended in a mild spicy flavor.  And the french fries were pretty good too although I didn't eat many of them. 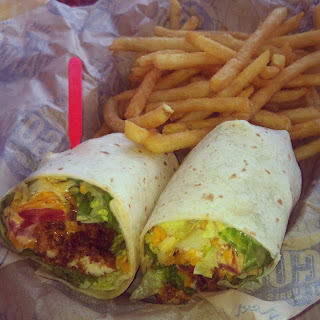 After we ate, of course we let the boys play in the sand hill!  And I got some cute shots of them too! 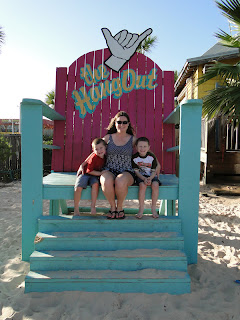 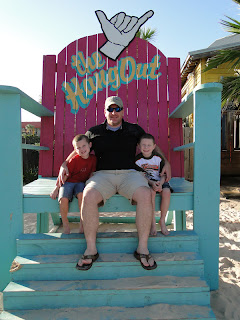 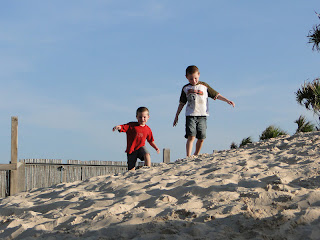 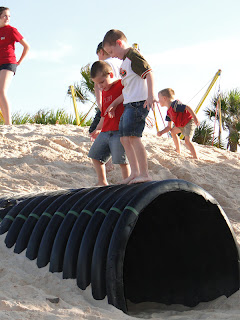 This concluded our Father's Day Fun Day!!!  Results...completely worn out kids AND parents!!!  That means we had a GREAT day!  :-)